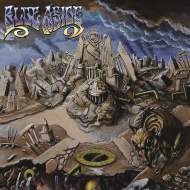 The Moles of a Dying Race

BLUE ASIDE's introductory EP from 2010, "The Orange Tree", showed promising musical glimpses from a band as creatively indebted to BLACK SABBATH as PINK FLOYD, but possessed of enough common sense to combine the two into novel shapes, the better to erect imposing monuments of mesmerizing space doom.

Now, the Boston-based trio has delivered an album-length, hour-plus extrapolation upon that eye-opening, mind-warping blueprint, which they've amusingly titled "The Moles of a Dying Race", but don't let that smirk-inducing choice fool you into underestimating its contents as lightweight musical fodder.

Yes, the Pink Sabbath / Black Floyd simplification still applies, but the crux of BLUE ASIDE's vision lies in the way they craft a comprehensive VIBE out of it all; a vibe that is equal parts languorously lysergic, deeply haunting and heavy as fuck.

The band's fundamental strategy is immediately put on display by the first of three segments comprising the album's title track (the others being spread out later in the set list),which builds hypnotically over long distances, piling reverberating power chords upon deliberate drum blasts, then soothing vocals over it all, and, spicing it all up, squirmy melodies teetering on the brink of dissonance.

Next number, "The Electrode Man", reprises all of the above with arguably even brighter ideas, plus sporadic cookie monster growls for emphasis; "Moles, Part 2" sculpts an intro out of Brian May guitar symphonies for good measure; "We Move to Sleep" segues from junkie guitar work a la ALICE IN CHAINS into idyllic prog-rock redolent of the late '60s Canterbury scene; and then the most ominous riff hear of late in this dimension introduces "Will We Remain Tomorrow", which piles on a childlike keyboard figure and more searing lead work to achieve a seriously unhinged sound.

Both of the latter also culminate in galloping metallic staccatos, which work wonderfully for dynamic contrast and as tension relievers; but a headlong detour down stoner rock highways with the anomalous, frankly forgettable, "The Ice Mammoth", quickly proves, BLUE ASIDE is best served focusing its energies on the doomier and spacier cornerstones of their sound.

Which they obviously do, by and large, wrapping up that whole "Mole" saga with a suitably cataclysmic, double kick-drum-enhanced "Part 3", and then the album as a whole with "Interstellar Overdriven"'s overt scientific upgrade on SYD BARRETT's original late '60s head-trip.

In sum, for fans of forward thinking metal inspired by ancient legends of metal and rock and fueled both by space exploration and simply tripping balls (MONSTER MAGNET, SONS OF OTIS, UFOMAMMUT, even ALCHEMIST),"The Moles of a Dying Race" may become a cause celebre come year-end-top-10-metal-album-list-compiling time.

And you know there'll be lots of explaining to do when it comes to defending that album title and BLUE ASIDE's commendable and cosmic achievement.