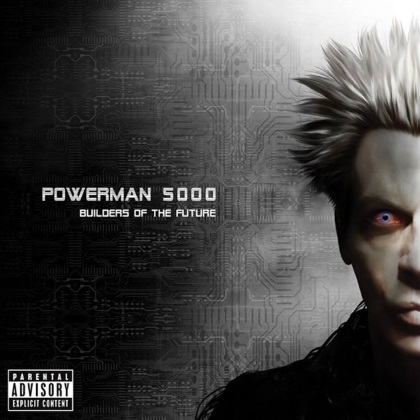 Builders of the Future

Spider One never accepts defeat. So professed on the opening track "Invade, Destroy, Repeat" from POWERMAN 5000's new album, "Builders of the Future". POWERMAN 5000 has come many miles since "The Blood Splat Rating System" and "Mega! Kung-Fu Radio", even if the current mark on the destination map sways full circle to 1999 and the band's breakout album "Tonight the Stars Revolt!"

Of course, the lone enduring personnel from "Tonight the Stars Revolt!" is Spider One himself and only one full-time holdout from POWERMAN 5000's previous album from 2009, "Somewhere On the Other Side of Nowhere", remains. Joining Spider and bassist Gustavo "X51" Aued this time around are guitarist Nick "Sci55ors" Quijano and drummer Adrian "Ad 7" Ost, along with supplemental guitars and drums coming from prior member Evan Rodaniche (aka Evan 9) and DJ Rattan, respectively. Rodaniche is also credited as a co-songwriter along with Spider, and former guitarist Dave "Velkro" Pino contributed to the writing on "How to Be a Human". The end result of "Builders of the Future" is a jump backwards in the attempt to move forward.

Spider One took a brief bow from his jumpy cyber rock plots on the back-to-basics punk sojourn, "Destroy What You Enjoy". That need to reconnect with the gutter well out his system, Spider and POWERMAN 5000 got back to the band's historic fixation upon groove on "Somewhere On the Side of Nowhere", which leads to this album's full-on pump.

"Builders of the Future" sounds like the Playstation model one era of mecha-minded party rock likewise endorsed by STATIC-X and, to some latitudes, Marilyn Manson. Spider One huffs with mock glee that we all like living in the digital age on "Modern World", which sounds behind-the-times at face value. There is, however, underlying sarcasm ladled into "Modern World" and on much of "Builders of the Future", where sci-fi obsession, gadget worship, information overload and cybersex undermine and gloss over the political stratum to the point we're blindly following along to the preset pulse of technology. It's not long before Clu bursts out of the "Tron" world and hijacks us all.

That being said, "Builders of the Future" is just about one dance rock jam after another before turning a couple of odd tricks to give Spider One and POWERMAN 5000 a pair of different holding cards. Much of "Builders of the Future" sounds like the aspirant soundtrack to a pop-flavored Silver Surfer movie adaptation. That, or an unapologetic retro return to the industrial dance metal and techno shakes that amped up the Mortal Kombat flicks.

"Invade, Destroy, Repeat", "We Want it All", "Evil World", "Builders of the Future", "How to Be Human", "Live it Up Before You're Dead" and "You're Gonne Love it, If You Like it Or Not" are tailored for maximum tempos and proto riffs carried by all of the electro-dance modes as can be withstood. This is the stuff Terry McGinnis and his friends grind ass and yell "Schway!" to in his downtime on "Batman Beyond". Of these, "We Want it All" has the toughest set of riffs and the best organic glue to keep this album grounded from its escapist's vie to blast off to nowhere.

The curveball to "Builders of the Future" comes with the acoustic-driven and damned unsettling "I Want to Kill You", where Spider One delivers a nearly sedate vocal performance on a song dealing with sadomasochism. There's still some suffused electronics rolled into the slow-rolling perversion of "I Want to Kill You", a song that comes off disturbingly hip and equally cinematic in nature. Not quite as effective is the calypso base Spider One calls up for "I Can't Fucking Hear You", which is front loaded with the loudest riffs on this album. It's a good idea in theory, but the intended lowbrow nature of the song doesn't quite measure up to its slinking rhythm.

Whether you're a fan or not of what POWERMAN 5000 stands for, Spider One sells it like those venom-crusted "slappers" in "Batman Beyond". "Builders of the Future" has a few in-jokes, but it's primarily about chasing an adrenaline rush. Live it up if you're so inclined.