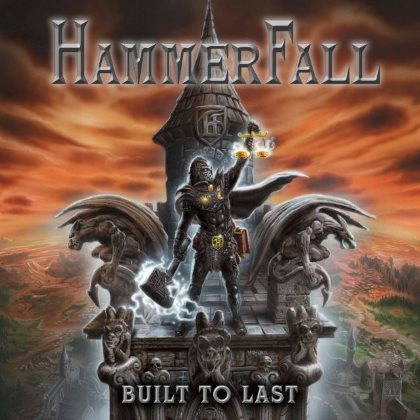 Following the band's 2015 "Maximum Metal"award bestowed by Metal Hammer (RIP Team Rock publications, hello again Future Publishing),power metal holdout HAMMERFALL returns with its tenth slab, "Built to Last". If MANOWAR's "The Lord of Steel"was gloriously predictable, so too is this one. Like MANOWAR, HAMMERFALL knows its hordes, and on this release, the group follows the former's playbook tighter than ever. "Built to Last"'s title track unapologetically runs straight to the bloody battlefields of "Battle Hymns"and begs for alliance. Like you were expecting HAMMERFALL to write an album about romance? Well, maybe if a big-breasted muse was involved: clad in chainmail and blowing posers (i.e. "infidels") kisses before collecting their heads.

"Bring It!" is a freaking hoot as HAMMERFALL plants a steady NWOBHM groove behind this prototype headbanger's rally anthem. It's a rolling cliché with every stand-as-one edict that can be crammed into the number, all while Joacim Cans chimes, "We'll back it up if you want to rock." Amazingly, this goofiness works because of the sheer gall behind the harmonious gang chanting of the song's chorus. You can lay 3 to 1 odds that "Bring It!" might've been a worldwide success if the colloquialism had belonged to the eighties.

In modern times, however, this primping metal esplanade is as silly as its successor, "Hammer High!"HAMMERFALL is hell-bent to make sure the world never forgets MANOWAR and trad power metal. "Hammer High!" marches under sacred skies in full belief that there's a squadron of false metal posers to be trounced in the holy name of DeMaio. Sing along, metal true: "Hammer high, this is a freedom cry, hammer high, no one should ask me why, it's my life, throw me a will defy, hammer high until I die…" Don't forget to take the oath decried within the HELLOWEEN-esque "The Sacred Vow" thereafter. Style points if you do so with a filled Das Horn drinking flask.

Like "Bring It!" though, HAMMERFALL puts its escapist convictions where its instruments are. Oscar Dronjak and Pontus Norgren strum with authority and peel the paint with their guitar solos. David Wallin is one of the latest in a long line of drummers behind HAMMERFALL, and he thunders along as stoically as anyone. (Note: After this album was recorded, David was replaced by Johan Koleberg.) Considering HAMMERFALL's methodology—shoved heartier than ever on this album—is to keep the candle burning for MANOWAR, Wallin does a valiant job switching between the power marches and the speed jams. The spectacular "Dethrone And Defy" is this album's triumph and he plays a big part in it.

The neoclassical power ballad "Twilight Princess" drops where you'd expect it to, middle ground, right before a song wielding the title "Stormbreaker". The latter is, naturally, an adventure-driven hero jam where you're already thinking about dragon slaying, crusading knights and Lucifer licking his chops from a vantage point highlands high long before Joacim Cans mentions them all. The cool element to "Stormbreaker", however, is the switch up in speeds. When it thrashes, "Stormbreaker" is a total badass.

HAMMERFALL has been around a long time, staking its rep on someone else's shtick, but the unit does so with its own flair. Never take away the band's talent, though, which has kept the group blinking on the metal radar all this time. "Built to Last" may be corny as all hell, but it's also madcap, death-to-false-metal fun.