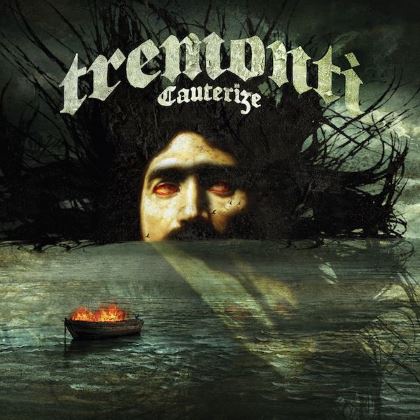 CREED and ALTER BRIDGE guitarist/vocalist Mark Tremonti is a versatile cat. Most people would hardly suspect he has a soft spot for thrash, given the mainstream pop rocks he's put his name to in the past. Tremonti once attempted to assemble a thrasher supergroup with Jamey Jasta and Joey Jordison, DOWNSHIFTER, which never got off the ground. Mark and his brother Dan soon formed the production company/record label/musicians' community Fret12, leading to the construction of Mark's instructional video, "Mark Tremonti: The Sound and the Story" and his first solo album, "All I Was". Tremonti has since gone on a creative splurge, penning 25 songs intended for two albums to be released this year, "Cauterize" and "Dust". Bringing none other than Wolfgang Van Halen into the studio on bass for these projects, Mark Tremonti seeks to have a huge year.

"Cauterize" leads off with the blazing "Radical Change", and instantly it becomes hard to disseminate all the ear candy spread throughout the track. Wolfgang Van Halen's rapid rumbling summons the immediate attention, but the smothering shredding between Mark Tremonti and Eric Friedman can't be ignored. The song hums with slowdowns reserved for the peppy choruses, over which Tremonti croons favorably. Next is the slower, chunky "Flying Monkeys" (yes, partially inspired by the Wicked Witch of the West's ugly minions) where Garrett Whitlock's rat-a-tat bass drum kicks on the verses give the chewy riffs extra strength. No matter how menacing "Flying Monkeys" purports itself to be (the bridge and solo sections being nasty in a good connotation),Mark Tremonti writes soaring, if inherently maudlin, choruses.

The jumpy feel of the title track is stuffed with killer riffs and shreds from Tremonti, Friedman and Van Halen as lead-offs to the verses and the last chorus, but the primary vibe of "Cauterize" is a cheery kickback to CREED, only with more active bass lines here. The knuckle-down outro between Tremonti and Van Halen is a slick maneuver. The band kicks the thrusters back up on "Arm Yourself", even if the expected slowdowns and hooky choruses become unfortunately predictable. To plus, the guitars and bass rain out gnarly scales on the verses, keeping things busy, even if thrashers coming here are going to want a full-on blitz attack.

As Tremonti has stated he's wanted to examine his full musical career and purge it through these two solo albums, expect the ballads "Fall Again", "Providence" and "Sympathy" to ring of both CREED and ALTER BRIDGE with denser projection—much of that being attributed to Wolfgang Van Halen. The agro pop swing of "Tie the Noose" will please the ALTER BRIDGE demographic. Unfortunately, any promise of a thrash party the album begins with is put to the side in the second half of the album, though it's the professionalism of the players that makes it worth hanging through. We'll have to wait later in the year to see if "Dust" has a heavier lean on speed.

Tremonti's guitar solo on "Dark Trip" is one of the chewiest his listeners will behold, and the grimy breakdown in the middle of the mostly soft "Another Heart" is rad. Tremonti also makes a strong case for himself as lead vocalist, frequently sounding like he belongs to the heyday of Eighties hard rock than the 1990s where he first made his name.

It's as much a treat hearing Wolfgang Van Halen come into his own outside of the VAN HALEN circus as it is hearing Mark Tremonti show off different dimensions to his musical acumen. "Cauterize" is bound to have oodles of accessibility given the successful rides on FM Tremonti has enjoyed in his past endeavors. By far, this album is the deepest demonstration of his gifts, though don't come to it expecting a thrash-out despite what you might be reading prior to.