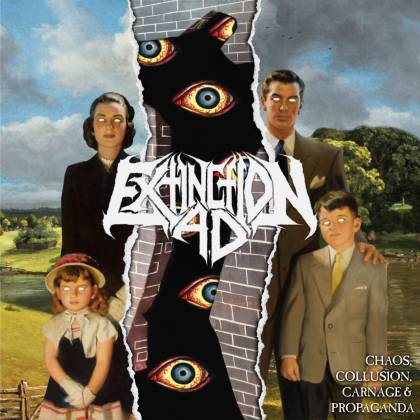 Sometimes the only legitimate approach to heavy metal is to get to the fucking point, and quick. EXTINCTION A.D. have already established themselves as among modern thrash metal's sharpest exponents. Both of the Long Island quartet's albums to date have been straightforwardly ripping, with 2018's "Decimation Treaty" standing out as one of the best things the genre has produced this century. But rather than simply jump onto the modern metal treadmill, this band have taken things down a defiantly old-school route in recent times, with low-key releases like last year's covers set "It's About Time That We Had A Change" and single "Undead Residents" heralding the merciless stripping back of any wasteful sonic fat.

One year on, "Chaos, Collusion, Carnage & Propaganda" is another jaw-shattering demonstration of brute force and ruthless brevity. EXTINCTION A.D. have long played this stuff with more precision and venom than most, but this four-track ambush sounds heavier, harder and considerably more intense than previous efforts. 102 seconds long and gloriously snotty, opener "Chaos" is crossover thrash perfection, and the future soundtrack to a thousand flipped tables. "Collusion"EXTINCTION A.D. is streamlined, mid-paced and old school to the bone, with multiple proud SLAYER-isms and enough beatdown heat to scorch the vest off your back. "Carnage" is all-out fucking war, with all the warped aggression of prime DARK ANGEL, shades of blackened frostiness and a vocal from frontman Rick Jimenez that almost certainly caused structural damage to the man's throat. Finally, as if to confirm that they have this brutal metal thing absolutely nailed, EXTINCTION A.D. casually peel off one of the most ferocious SEPULTURA covers of all time. "Propaganda" was always an unqualified rager, and here it slams and grinds with every bit as much imperious fury as the original.

And that's it — 11 minutes, four songs. A jolting dose of thrashed-up hardcore savagery. The sound of a great band sharpening their focus and kicking off like madmen. Point made.