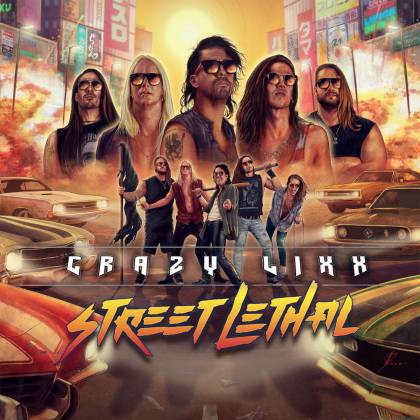 While arguably more celebrated in the world of compulsory satin tour jackets than in the metal mainstream, Sweden's CRAZY LIXX have made a mockery of the notion that '80s glam metal is a stale idea. There are certainly plenty of bands peddling something similar, but the mighty H.E.A.T. aside, no one nails the sound and vibe of the days when DEF LEPPARD and MÖTLEY CRÜE ruled the planet better than these spandex upstarts. "Street Lethal" is the band's seventh studio album, and while lesser talents would be battling with the law of diminishing creative returns at this point, CRAZY LIXX sound fresher than ever here, armed with some killer songs that boast a cutting-edge production sheen that offsets what is an otherwise defiantly retro experience.

If you want fiery, hands-in-the-air anthems, "Street Lethal" is designed to deliver. "Rise Above" and single "Anthem For America" are instant gems, as the Swedes' AOR instincts collide with riffs catchy enough to give PHIL COLLEN sleepless nights. "One Fire — One Goal" is another joyous bull's-eye, with inch-perfect vocal harmonies and a chorus worth fitting into those dimensionally challenging skinny jeans for. In between there are moments of shrewd modernism (the gently simmering synthwave pulse of instrumental "Final Fury"),gleefully overwrought ballads ("In The Middle Of Nothing") and several songs that sneak proper heavy metal riffs in through the back door, not least the jagged thud of the title track.

The closing "Thief In The Night" is perhaps the only major surprise here: not that CRAZY LIXX have any credible reason to stray from their chosen formula at this point. Seven minutes in length and audibly touched by IRON MAIDEN's spectral hand, it's the album's heaviest and most memorable moment, as none-more-classic riffs conspire toward giant chorus crescendos, stopping off for some wickedly saccharine instrumental emoting midway through. Any lingering doubts you might have about "Street Lethal"'s seriousness as an artistic endeavor evaporate instantly, because as much as CRAZY LIXX are all about raising spirits and evoking the exuberant spirit of a distant decade, they are also incredibly, obnoxiously good at this stuff, and their seventh album is unequivocally their best yet.