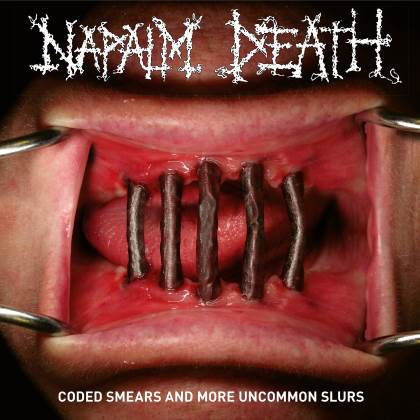 01. Clouds of Cancer / Victims of Ignorance
02. What Is Past Is Prologue
03. Like Piss to a Sting
04. Where the Barren Is Fertile
05. Crash the Pose (GAUZE)
06. Earthwire
07. Will By Mouth
08. Everything in Mono
09. Omnipresent Knife in Your Back
10. Lifeline (SACRELIGE)
11. Youth Offender
12. No Impediment To Triumph (Bhopal)
13. Legacy Was Yesterday
14. Outconditioned (DESPAIR)
15. Atheist Runt
16. Weltschmerz (Extended Apocalyptic Version)

NAPALM DEATH has nothing to prove. The British band is the pioneering crew that has carried the torch from the inception of grindcore through to today. It's been kicking out the jams for over 30 years, and the group's music offers enough that can appeal to a crust punk or death metal fanatic as well as a LAMB OF GOD fan or someone just discovering heavy music. The veteran's most recent studio effort, 2015's "Apex Predator – Easy Meat" proves that the band remains as relevant as ever, both musically and with regard to its sociopolitical commentary. Come 2018, "Coded Smears And More Uncommon Slurs" is a special 2CD, 2LP and digital-download compilation that includes 31 songs, with a playing time exceeding 90 minutes. It is comprised of rare and exclusive tracks and covers—from split EPs, now-sold-out releases and Japanese bonus tracks—from the 2004-2016 time period.

"Coded Smears And More Uncommon Slurs" sounds like anything but a stopgap release. It truly feels like a new album worth digesting like any other new NAPALM effort. The band's members, musical extremists, are not getting any younger. You wouldn't think so by listening to them or seeing one of their live performances, where the band crushes the competition, including those whose members are half their age. Yet, in a sense, their age does show, but in the best way possible. While they don't sound as though they're getting tired, their songwriting seems more wise and mature. They've established a style that works, and the proof is in the pudding as evidenced by this release's decade-spanning material. There is little that one won't expect from a new NAPALM DEATH release if you've heard another one from the last 15 years, but this isn't a band going through the motions. The group isn't predictable. It is reliable, and the unit is ruthless.

Even though the band is primarily known as being a violent speed show, there's so much more to NAPALM DEATH. The members' considerably diverse taste in music emerges in various ways, most notably perhaps when the group slows things down and shifts focus toward dreamlike ambience as it does on "Oxygen of Duplicity", which was pulled from its 2013 split with the MELVINS. Such tracks breakup what would otherwise become a monotonous barrage of blast beats and screaming, offering a period for listeners to mentally breathe between the crushing songs both on record and in the live setting. These songs aren't simply there for such perfunctory purposes, however. They genuinely represent NAPALM DEATH's musical interests and adventurous musical spirit. The contrast provided also accentuates the more blistering moments ensuring that they don't lose their potency. So, when follow-up track "Paracide", a GEPOPEL cover that was a Japan-only bonus track from "Apex Predator – Easy Meat", kicks in, the eardrums have been properly soothed only to be battered to a pulp once more.

In short, "Coded Smears And More Uncommon Slurs" isn't anything new. But it does represent everything that is right with intense music in terms of sound and spirit. The masters deliver yet again.