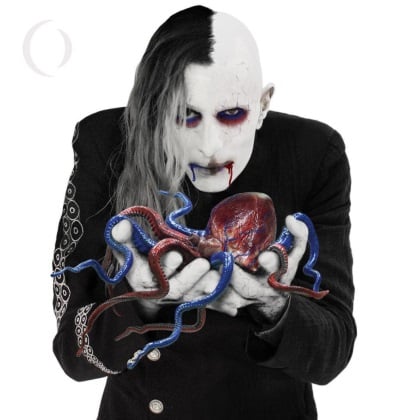 It's been 14 years since A PERFECT CIRCLE released an album. As Lars Ulrich pointed out during his interview with Maynard James Keenan on the METALLICA drummer's Beats 1 radio show, "It's Electric!", that's nearly how long it took for GUNS N' ROSES to re-emerge with "Chinese Democracy". (Interestingly enough, Keenan responded by saying that his cohort in crime, Billy Howerdel, actually worked on "Chinese Democracy".) Perhaps the band's resurfacing is not quite as dramatic as Axl Rose's return to the spotlight, but A PERFECT CIRCLE's fanbase has been nearly salivating with anticipation. Keenan has suggested in other recent interviews that the decade-plus wait for the next TOOL album may not reach a point of climax any time too soon. Also seeing an open window of time considering activities involved with his winery business, the iconic frontman deemed it appropriate to reconvene with Howerdel—the two musicians being the creative masterminds and founders of the band—to work on new A PERFECT CIRCLE material.

With logistics and real-world scheduling matters finally squared away, the resulting artistry has manifested itself on A PERFECT CIRCLE's fourth full-length album: "Eat the Elephant". The band's first five years together essentially represent its actual period of creative output, and it was a prolific one at that. During this period, the group released two albums of original material as well as its last effort, 2004's "Emotive", an anti-war covers album aside from the inclusion of couple of originals. People change over time. They are no longer 20- and 30-somethings. The ensemble's members are all near and over the age of 50. A PERFECT CIRCLE isn't attempting to desperately capture a former period of glory. Perhaps it is the subsiding testosterone that marches in tandem with age, but the music is much more soft and mellow nowadays.

You won't hear any of the hard rock and alternative metal stylings of the debut, "Mer de Noms", or the relatively more subdued and more diverse follow-up, "Thirteenth Step" on "Eat the Elephant". There is no "Judith". The heaviest they get is with a track like "The Doomed", a number that plays with a sense of building tension than never reaches the presumable explosive end. "Delicious" may be most directly reminiscent of classic A PERFECT CIRCLE material with the song's bending, dramatic melodies and massive sound. Howerdel instead designed pensive and introspective music highlighted by his smooth piano wizardry as much as the adept, hefty guitar work that he is predominantly known for.

The title track starts things off, in fact, with a slow piano driven ballad that suggests all that follows: measured, intricately crafted songs that sway between dismay and melancholy. A PERFECT CIRCLE's tried-and-true overt heaviness seems to be a thing of the past, but the songs aren't any less spectacular. The depth evident within "Eat the Elephant" begins to appear the more you take time to appreciate its nuances.

Howerdel wasn't the only one challenging himself. Keenan, too, clearly pushed himself in terms of approach, range, tonality, even his enunciation. His crooning is beautiful, better than ever, and ever-present. The strong bellow he's known for only really surfaces on "The Doomed". At times one might be forgiven for thinking someone else is singing, so dissimilar is his voice—specifically in terms of timbre—on a track like "The Contrarian" than anything we've heard from him before. He spits out an almost Middle Eastern-flavored round of melisma at the onset of "By And Down The River", and a punchy, rhythmic delivery with a Germanic inflection in the danceable, synth-pop/new wave styled track "Hourglass".

A PERFECT CIRCLE has become relatively calm with maturity but just as socially aware as ever with lyrical intent. "So Long, and Thanks for All the Fish" is peculiar and enjoyable with its more obvious pop-like sensibilities mirroring the subject matter, society's pop-cultural obsession in a broad sense using relatively recent celebrity deaths of the likes of David Bowie, Muhammad Ali and Carrie Fisher as an entry point. A part of Keenan's message seems to be that death always serves as the ultimate reminder to make the most of life. As per usual, Keenan makes you think, and collectively A PERFECT CIRCLE sounds fantastic, albeit in a very different way.