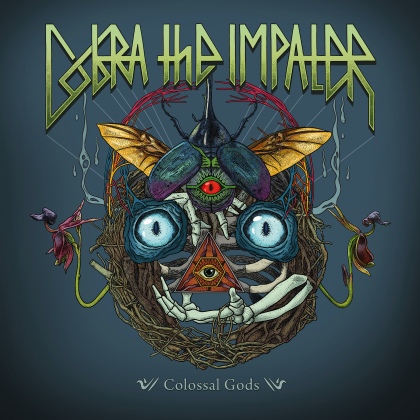 It may not be instantly obvious what a "grand electric skull" is, but by the end of the opening track on COBRA THE IMPALER's debut album, most discerning listeners will definitely want one. This Belgian mob have the perfect post-millennial metal sound: thunderous, melodic and proudly progressive, it bears a strong enough resemblance to modern benchmarks (MASTODON in particular) to grab the attention of the metalhead majority, but with a bold identity of its own that points to a bright and fascinating future.

There is a strong whiff of mid-'90s, grunge-influenced metal lurking in these songs, and it adds to a diverse overall sound that marks COBRA THE IMPALER out as gentle eccentrics. With vocal harmonies that hit a smart midpoint between the haziness of TORCHE and the crisp, soulful finesse of KING'S X, this band have the confidence to thrust melodies into the foreground; and despite favoring the intricate over the straightforward, these songs are often disarmingly catchy as a result.

"Colossal Gods" itself is a shrewd entry point that showcases COBRA THE IMPALER's pigeonhole-defying tendencies across five minutes of sandblasted and malformed stoner rock. "Blood Eye" is a feast of elegant transitions, from soaring vocal hooks and taut metal riffing, to windswept and wistful post-metal zone-out. "Spirit Of Lyssa" begins like a doped-out salute to IRON MAIDEN's "Flash of the Blade", before mutating into a juddering blend of post-GOJIRA crunch and VOIVOD-ian psych; "Scorched Earth" wallows in doomy squalor, armed with a gloriously morbid chorus and shades of PSYCHOTIC WALTZ's lysergic prog-metal blueprint. Elsewhere, "Spawn Of The Forgotten" blends thrash-powered aggro with stately melodic melancholy, and "Demigods" is simply a very fine heavy metal song with a perverse streak a mile wide. Even more structurally familiar cuts like "Tempest Rising" and tastefully bleak closer "Mountains" crackle with creative sharpness and swagger.

Almost comically overburdened with great riffs and powerhouse vocal performances, "Colossal Gods" is a classy and characterful debut. The artwork is impressively bonkers, too.