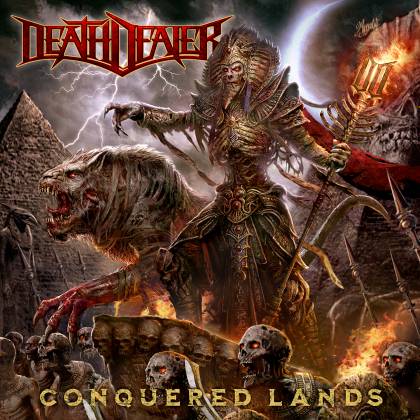 There comes a time in every metalhead's life when one question becomes unavoidable: exactly how much metal can you actually take? Many are those that fall by the wayside, overwhelmed by the purity and majesty of the real thing. And make no mistake, folks, "Conquered Lands" is absolutely 100% metal-as-all-monolithic-fuck, and absolutely not for the faint or false of (metal) heart. The presence of the legendary Ross "The Boss" Friedman should tell you everything you need to know about DEATH DEALER, but if that isn't sufficiently convincing, chuck in the glass-shattering mega-pipes of Sean Peck (CAGE) and one of the most speaker-levelling, maxed-out productions jobs in recent memory, and then stand back and enjoy having your face blasted off.

Ross "The Boss" has already released one great heavy metal record in 2020 under his own name: the utterly ripping "Born Of Fire". But while he knowingly salutes his days in MANOWAR with his titular crew, DEATH DEALER is a much more contemporary and brutal endeavor. Admittedly, we're firmly in traditional songwriting territory here, but from anthemic opener "Sorcerer Supreme" onwards, it's intensity, aggression and Peck's astonishing voice that define the experience. Songs like "Every Nation" and "Running With The Wolves" owe their leathery hides to the '80s metal old school, but both are sonically crushing and performed with a very modern precision, too. The title track takes a slower, heavier route, with echoes of Tony Martin-era BLACK SABBATH suiting DEATH DEALER just fine; while "Hail To The King" is a thrilling splurge of MAIDEN-esque clatter 'n' groove, embellished by a typically scalp-removing Peck vocal. Elsewhere, "Slay Or Be Slain" combines some of the ugliest, heads-down riffing you will hear this year with macabre vocal harmonies and an unexpectedly poignant and moving chorus. Even the willfully overwrought "22 Gone" strikes a decent balance between melodrama and mawkishness, while "Born To Bear The Crown" brings the final curtain down at full, belligerent pelt, alongside blistering solos from Ross "The Boss" and six-string compatriot Stu Marshall erupting in all directions, like showers of infernal sparks.

As the final notes detonate, listeners will be left feeling completely confident that they have received a dose of heavy metal in its purest, proudest form. Wimps and posers probably shouldn't bother getting involved. It's for your own good, I promise.