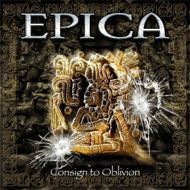 The obvious comparisons to WITHIN TEMPTATION, NIGHTWISH, or even EVANESCENCE will have to be made here, of course. After all, EPICA is a symphonic metal band with a mezzo-soprano female vocalist (though guitarist Mark Jansen does throw in the occasional death growls),augmented by a string section and choir. However familiar EPICA's sound may be — hell, anyone subjected to an Andrew Lloyd Webber musical will get the idea — there's no denying, though, that the band is pretty good at what they do.

As seems to be the case in many groups like this, the metal instruments — guitar, bass, and drums — seem to take a backseat to the vocals and orchestral hooks. As such, the songs live and die by those melodies, and when they're not strong (see "Quietus") the result is boredom. Check out "Mother of Light", though, for great male-female vocal interplay from the choir, and an awesome, bombastic chorus. "The Last Crusade" finds a rare moment where the guitar asserts itself, with a simple, yet highly effective riff that opens the song and gives it an undeniable groove. And if that Broadway musical comparison above made you queasy, then be sure to skip "Trois Vierges", a maudlin ballad sung by vocalist Simone Simons and KAMELOT's Roy Khan.

While some of the material here is sub-par or just bland, it seems EPICA put the most time and heart into the three movements of "A New Age Dawns" — the songs "The Last Crusade", "Mother of Light" and the nine-minute-plus title track. On the latter, especially, the band seems to delight in the extra room to stretch out, throwing in blast beats, more death/black vocals, much more varied vocal lines from Simons, and great work from the choir. It's the crowning achievement of the album, if not the band's career, and if the whole CD was as strong as this, it'd be in the Top Ten of the year for sure.

Overall, there's nothing really wrong with EPICA, except for those aforementioned moments of generic blandness. They still don't quite seem to be at the world-class level of other bands playing this style. That said, more rabid fans of all things theatrical and symphonic will eat up "Consign to Oblivion". The band is definitely on the right track, and will likely be one of the rulers of this scene before too much longer.