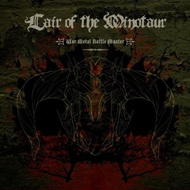 LAIR OF THE MINOTAUR

Chicago's champions of true metal and all things battle-scarred return with album number three, the righteously titled "War Metal Battle Master". What a perfect title to use in describing the essence of LAIR OF THE MINOTAUR. The new disc features everything you've come to the love about the grimy trio. Like CELTIC FROST and early SLAYER caught in a meth lab explosion, "War Metal Battle Master" is the biggest, baddest LAIR OF THE MINOTAUR release yet.

First things first. If you loved "Carnage" and "The Ultimate Destroyer", there is absolutely no reason to think that you won't love "War Metal Battle Master". The new disc is a case of the whole being greater than the sum of its parts. Whereas "The Ultimately Destroyer" featured a handful of immediately memorable songs, the title track and "Cannibal Massacre" in particular, "War Metal Battle Master" is more of a grower than is best suited for consuming in its entirety. The songs are slightly more involved, but the riff continues to the weapon of choice in making the point. "Horde of Undead Vengeance", "When the Ice Giants Slayed All", and "Black Viper Barbarian Clan" are some of the meanest, nastiest tunes the band has ever written. "Doomtrooper" is the epic track here, clocking in at a tad less than 10 minutes and smothering the listener with 10 tons of "fuck off and die" warrior might. Everything (guitar, drums, bass, vocals) on the album sounds monstrous too, helped in no small way by the godly recording of Sanford Parker, the man completely outdoing himself with this one. "Dense" is the first word that comes to mind when I think of the sound on this one.

You'll not be surprised to learn that the lyrics — accompanied with graphic depictions across a fantastic 20-page booklet — are a highlight too. The concept about "solving conflicts with a big fucking axe" is the product of guitarist/vocalist Steven Rathbone's meticulous research into Greek mythology, albeit done with poetic license. A term like "bloodlust" doesn't even begin to define the content.

It doesn't get more metal than LAIR OF THE MINOTAUR. There is no cross pollinating going on here, no 'core elements, and eyeliner is nowhere to be found. This is the real deal, folks. And just when you thought things couldn't get any uglier.