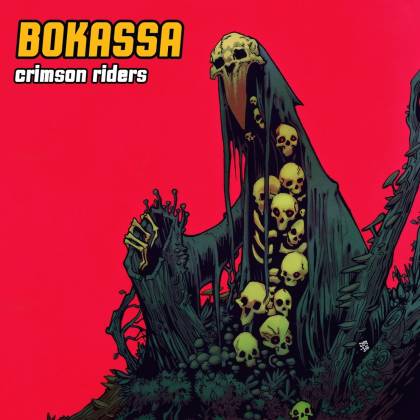 There are few things more likely to enhance your profile than a celebrity endorsement. He may still have an uncanny ability to generate controversy, but when Lars Ulrich declared that BOKASSA were his favorite new band, he almost certainly enabled the Norse "stoner-punks" to skip a couple of years and make a far bigger splash with their debut album than they would have done otherwise. That's no reflection on the band's music, of course. It's not hard to work out how or why they grabbed the METALLICA drummer's attention, and there is an undeniable maturity on display throughout "Crimson Riders", suggesting that success would have arrived eventually anyway. These are big songs, designed with a big audience in mind and played with plenty of confidence and flair. There are faint echoes of fellow Norwegians KVELERTAK in the band's hybrid sound, but the similarity is superficial at best. BOKASSA are a much more polished, radio-friendly entity, albeit one that regularly veers off into either stoner metal or shout-along hardcore territory (and sometimes both simultaneously).

In fact, BOKASSA's stoner credentials are somewhat questionable: the overriding influence that seems to drive every one of these songs at a breathless pace is punk rock, and the kind of brutal punk rock that smashes first and asks questions later. There is plenty of fuzz in the band's perpetual wall of guitars, and there are occasional mid-paced moments with shades of TORCHE's pie-eyed blitzkrieg. But this is noticeably high-energy stuff from first to last, with a sense of urgency that only the truly ambitious and fired-up can generate. Metal is integral here, too, as showcased on the heads-down riff-slalom of "Charmed & Extremely Treacherous" and the raging blastbeats and ANTHRAX-like grooves of epic closer "Immortal Space Pirate 2", but it doesn't take a cynic to foresee those more extreme elements being thoroughly ironed out by the time BOKASSA make another record. Either way, "Crimson Riders" exerts a huge amount of sonic weight, even on something as unashamedly poppy and direct as "Vultures", wherein the Norwegians indulge their alt-rock instincts, adding a gloriously unexpected sax solo along the way.

When a big, dirty, post-SABBATH stoner riff does finally arrive, it's a really good one. "Wrath Is Love" is the album's iPhones-in-the-air moment; a muscular slab of doomy thrashcore with gang vocals galore and a soaring chorus straight out of the melodic hardcore handbook. Similarly, "Captain Cold One" combines gnarly SLAYER-style arpeggios and metalcore chug with a rousing chorus of MISFITS woahs and big, dumb post-hardcore chorus. In less capable hands, these stylistic mash-ups could have been painfully self-conscious but somehow it all works, thanks in part to those unwavering energy levels.

It's barely worth pointing out that not everyone is going to enjoy BOKASSA's big, shiny rock 'n' metal hybrid as much as Lars Ulrich, but then it's doubtful that Lars expected many diehard metal fans to get excited about ARCTIC MONKEYS either. Whether they're the next big thing or just another false dawn is anyone's guess: what's undeniable is that "Crimson Riders" is the sound of a kickass band that really, really wants to rock your socks off.