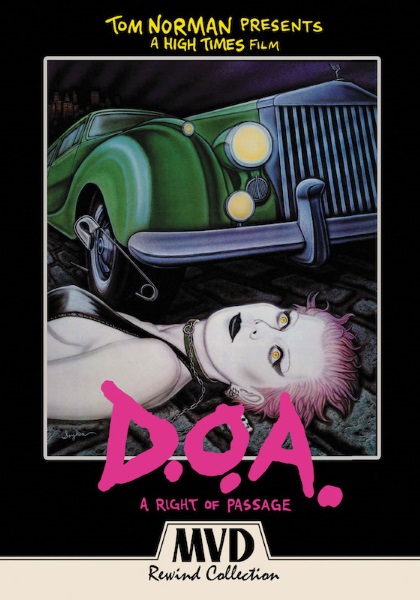 Once upon a time, punk happened. Not at your local Hot Topic. Not in the pages of a "Rolling Stone" 100 Best list; they could've hardly cared when punk actually started. It happened in a splintered and angry United Kingdom, then it came rudely sauntering in like an unwanted party crasher to the United States. Granted, the U.S. had already sprouted its own punk scene in New York City, mirroring London's gaudy, pus-filled tattoo of economic woe. THE CLASH, THE JAM and SHAM 69 refined punk to a state of credibility, yet the SEX PISTOLS lent the attitude and the noise to a disco-drained audience in search of the next loud and candid vibe.

When the SEX PISTOLS toured America in 1978 in a highly publicized, ill-advised jaunt through its redneck and bible-thumping demographic, they made history. Warner Brothers knew what they hand on their hands, and what the likely reaction would be upon the irresponsible path they sent THE SEX PISTOLS. Like the ROLLING STONES once did, security was hired in the form of bruising, beer-bombed bikers. Alienated youth searching for a gathering nest created a purposefully crass microcosm. They were infiltrated by crusaders, police and Friday night drunks who pelted THE SEX PISTOLS with beer cans, trash balls and even mashed potatoes. As if the gobbing back home wasn't obnoxious enough. You do the math why the tour became an absolute mess and the PISTOLS broke up thereafter.

Enter into the fray "High Times" magazine founder Tom Forcade—once labeled "The Most Dangerous Man in America"—and filmmaker Lech Kowalski. Their proposal: to document this momentously decadent rock happening, capturing under their lenses an unchecked flashpoint of social change. The film that would become "D.O.A.: A Right of Passage" had everything going against it, in particular Warner Brothers, who could've made a wiser financial decision by colluding instead of blockading.

Thus, the guerilla film texture of D.O.A.: A Right of Passage gives it the fairest glimpse into punk rock's origins on the heels of trash civilization legends who would only release one album in its heckled and blood-stained career. Yet "Never Mind the Bollocks, Here's the Sex Pistols" still stands as the widely celebrated monster it is, if for nothing else, its raw honesty encapsulating a bemoaning spirit of "No Future" in Great Britain. "A Clockwork Orange" had come to fruition, a broke-ass failure of an industrialized monarchy which fermented the anger, but more so, the social indifference of a generation coming up under broken wings and omnipresent rubble. Only the Luftwaffe had made the U.K. bleed harder.

After filming wrapped on "D.O.A.: A Right of Passage", a mind-blowing succession of deaths occurred, beginning with SEX PISTOLS bassist Sid Vicious's girlfriend Nancy Spungen, then Tom Forcade a month later, and next, Sid himself the following February. The movie had been intended as a SEX PISTOLS tour diary, inclusive of an awkward, murmuring backstage interview with Sid and Nancy—one where Spungen had no qualms baring herself in front of the photographer while trying to prod the aloof, drug-bombed Sid for responses as his self-appointed and deluded voice of reason. If you're singing the mantra "No future" under your breath during this baffling yet fascinating footage of two lazy sods on a partnered path of self-destruction, you're not to be blamed.

Following Forcade's death, "D.O.A.: A Right of Passage" turned into a disjointed if precise documentation of punk rock. Flashes of "Fight Back" graffiti upon the walls of disheveled London mingled with brutal footage of street fights and scrums with the bobbies to the sarcastic swing of THE CLASH's "Police and Thieves". The movie begins with an artful opening montage of stacked 45 records against baptismal rites in the Catholic church. Forced conformity begets rebellion. It ultimately pits punk versus conservatism with no real winner to crown.

Naturally, a heavy blast of THE SEX PISTOLS's music is chronicled, the lyrics to many strewn for sing-along edification: "Holidays in the Sun", "EMI", "Liar", "Bodies", "Pretty Vacant", "New York", "I Wanna Be Me" and of course, the group's signature angst anthems "God Save the Queen" and "Anarchy in the U.K. "

What "D.O.A.: A Right of Passage" does best is to present a mutated subculture where Ziggy Stardust, THE STOOGES, mod and vampire chic collide. The pioneers of punk were a razed and dazed mutant army coiffed with every color under an acid-tainted rainbow, clad in zipper-crazy bondage trousers, and fastening the entire gruesome anti-fashion package with garish "punk pins." In admiration, Lech Kowalski shoved his cameras up the chute of punk's pimpled and scarred ass with sociological fanaticism.

American reactions to the SEX PISTOLS in 1978 rang to the likes of "It's better than homework" to "garbage" with one female fan raving with the colorfully weird edict "Johnny Rotten's face...I thought I'd vomit it's so beautiful." Johnny himself once sang that he never wanted a baby that looks like an animal, but punk rock became just that. Like Linnea Quigley lithely dancing naked atop a grave in "The Return of the Living Dead", this film is perversely beautiful in its nihilistic repulsiveness.