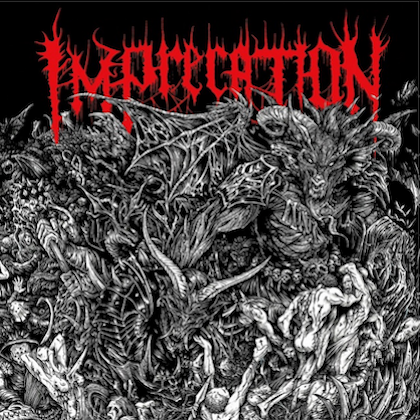 01. Temple of the Foul Spirit
02. Morbid Crucifixion
03. Baptized in Satan's Blood
04. Beasts of the Infernal Void
05. Damnatio ad Bestias
06. Dagger, Thurible, Altar of Death
07. The Shepherd and the Flock
08. Ageless Ones of None

"Everything is bigger in Texas." Hyperbole aside, whether we're talking about its far reach in terms of geography or the fact that it's the 10th largest economy on the planet, the Lone Star State truly is gargantuan on numerous levels. Having said that, while in-state metal diehards are well aware and appreciative—whether we are talking about transplanted KING DIAMOND or a pedigree pulled from the soil ranging from ABSU and WATCHTOWER to RIGOR MORTIS and PANTERA—the global scene at large isn't necessarily as cognizant of the scope of the state's enduring, hard-hitting talent and rich heavy metal history.

Since its inception nearly three decades ago, IMPRECATION has garnered its share of the underground's praise, but the Missouri City-based demonic death metal outfit remains overlooked by many death metal fanatics. Those in the know, however, are permanently infected by the tremendous force of "Theurgia Goetia Summa", the unit's classic compilation of its preliminary demos and EP. When it has been in operation, it was inactive for a decade, it has released demos and EPs more than anything. But while the group isn't exactly known for being prolific—which, intuitively enough, explains why many are unaware of their existence, influence and relevance—IMPRECATION is a prime example of the "quality over quantity" axiom.

The group's debut full-length album, "Satanae Tenebris Infinita", wasn't released until 2013, in fact. The ensemble hasn't released anything since the split with BLASPHERIAN that was put out the following year—until now, that is. IMPRECATION has returned in 2019 with its sophomore effort, "Damnatio ad Bestias", and the wait has been worth it. The Texans have maintained a high standard throughout their career, meaning that they're much more than simply the band responsible for "Theurgia Goetia Summa". "Damnatio ad Bestias" arrives at a favorable time, one during which the adjective "cavernous" has been overused by writers to the point that metal media consumers may trip over the word, such is the extent to which INCANTATION-esque "Old School Death Metal" has become en vogue. IMPRECATION has often been compared to INCANTATION, not an entirely off-base comparison given loosely defined parameters, but aside from general shared sound qualities and inclinations toward the darker side of life and existence, the two bands are more distinct than they are otherwise.

"Satanae Tenebris Infinita" showed the band's great promise. On full display was their refined take on the early format of bombastic death metal crunch merged with evil, melodic keyboard surges. It didn't seem quite as inspired as the act's earliest material, though. But with "Damnatio ad Bestias", while the formula remains the same—exquisitely and dramatically displayed on the opening number "Temple of the Foul Spirit"—the material and performances exude the same sense of youthful exuberance and magic that made "Theurgia Goetia Summa" so special.

"Damnatio ad Bestias" ultimately succeeds because of the brilliant equilibrium struck between cataclysmic crunch and ominous atmospherics, as well as the dense sonic heaviness and masterful use and placement of negative space. What's more, the manner in which they explore both blasting death metal ("Baptized in Satan's Blood") and slower, death doom tempos ("Dagger, Thurible, Altar of Death") provides sufficient contrast and dynamics to keep things interesting throughout. At the end of the day, "Damnatio ad Bestias" proves that IMPRECATION is worthy of the hype and reputation, making music that will satisfy those elitists who cross their arms at shows and only like bands' demos and the first three MORBID ANGEL and DEICIDE albums.