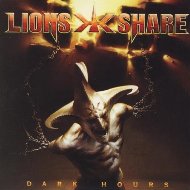 If you love melodic heavy metal (or muscular power metal) and you haven't heard of LION'S SHARE, then you really must start researching now! "Dark Hours" represents what this band is all about: great riffs, diesel-fueled rhythms, and spectacular melodies, and I mean every one of these 11 tracks. The band sets its sights on the target and annihilates it every time. Few do it better.

Forty four minutes flies by in no time, thanks to the band's immense songwriting talents. It is their keen ability to pack so much power into a three-to-four minute track that makes the material so damn engrossing. Every member contributes to the powerfulness of the whole too. Guitarist Lars Chriss' playing is familiarly classic, yet fresh; his riffs sharp and chunky, no matter the speed at which they're played, his solos burn hotter than the sun, and the melodic twin leads are so well placed (e.g. "The Presidio 27") The duo of bassist Sampo Axelsson and drummers Conny Pettersson (ANATA) and Richard Evensand (CHIMAIRA, SOILWORK, THERION) is trampoline tight, rhythmically varied (within the confines of generally fundamental structures) and textured. But it is the commanding vocals of Patrik Johansson (ASTRAL DOORS) that can turn a good melody into a great one and make a song soar high above clouds. His Dio-esque style is smooth and gritty at once, as he navigates a range of styles that gets the most out of each song. Lyrically, the band explores the dark side of the turbulent 60s.

Then there is the essence of the songs themselves. We sometimes forget about those albums that made you want to revel in the glory of each song, never skipping around to find that one special track, and always desiring front-to-back listens. "Dark Hours" is one of those albums. It is the kind of album where you'll know every lyric and join in on every memorable chorus. "Judas Must Die" is the grand opener, a heavy metal scorcher that is in fact reminiscent of early DIO. Joining it in the category of fire and brimstone heavy metal is mid-paced cruncher "The Bottomless Pit", one of several songs that feature an eerie verse with a dark vocal treatment, including some spine-tingling whispered/spoken vocals. Another is the "Phantom Rider", one that has Chriss shredding from the start. An epic chorus explodes in glory before Chriss restarts the rip. Album closer "Behind the Curtain", the longest track at 5:19, is a tough customer that also spooks with light picking and sinister vocals. Keyboard melodies on the up-tempo "Napalm Nights" and the quick-stepping, DIO-driven "Demon in your Mind" are brilliant touches, while the atmospheric keys on a slow-paced behemoth called "Heavy Cross to Bear" are one of several aspects that give the song a sort of Tony Martin era BLACK SABBATH vibe. Topping it all off is the superb talent of guest player Michael Romeo (SYMPHONY X).

The album is rounded out by a collection of songs with massively impacting melodic choruses, including "Full Metal Jacket", "The Barker Ranch", "Space Scam", and "The Presidio 27". The album is just overflowing with heavy metal grandness. If you want to split hairs you could complain about LION'S SHARE adding nothing new to a tried and true formula, but when a band does it so convincingly and with such heartfelt passion, who really gives a shit?