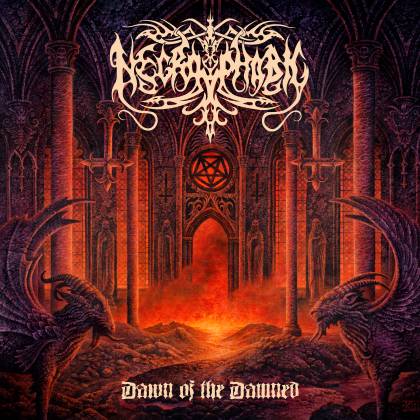 Dawn Of The Damned

Black metal has come a long way in its forty-plus years of existence and evolution. These days, our options vary from the utterly low-fi and feral DIY end of the genre to the glossy, high production values of the post-DIMMU set, with all manner of weird, wild and grotesque alternatives swirling around somewhere in the middle. But as much as we're spoilt for choice, there will always be a lot said for a record like "Dawn Of The Damned": a big, ugly, violent and malevolent black metal record that goes for the jugular over and over again until everyone is dead. Or deaf.

Much like their fellow countrymen DARK FUNERAL, NECROPHOBIC have been ploughing this same furrow for the best part of 30 years, eschewing the progressive niceties that have sidetracked many of their peers, in favor of a balls-out, gung-ho and remorselessly blasphemous approach. Something has changed in recent times however: the band's former inconsistencies seem to have chiseled away, and since the 2018 suburb release "Mark Of The Necrogram", the Swedes have looked and sounded more potent and focused than ever before. "Dawn Of The Damned" simply hammers that point home again, but harder and via some of the best songs guitarist Sebastian Ramstedt has ever written.

Preview single "Mirror Black" spoke volumes about the confidence coursing through this band right now. The hooks are huge, but the venom and raw fury are unmistakable. This kind of black metal can often seem a bit corny and damp with lazy shlock, but NECROPHOBIC are very much the real deal, with drummer Joakim Sterner's untamed hammering and vocalist Anders Strokirk's barbarous rasp, these songs are utterly convincing. "Darkness Be My Guide" is a seething, rapacious opener, very much rooted in NECROPHOBIC trademarks, but with a clarity and power that the band have only hinted at before. An epic like "The Infernal Depths of Eternity" deftly swerves notions of theatricality in favor of palpable mounting tension and Lovecraft-ian dread, across its seven sprawling minutes of schizophrenic bombast. The title track is an exquisite four-minute marvel, steeped in melodic iciness but with the motoring muscle of modern extreme metal propelling it forward at a venomous pace. Meanwhile, the closing brace of "The Return of a Long Lost Soul" (think IRON MAIDEN's "Powerslave" re-imagined by slavering caco-daemons) and "Devil's Spawn Attack" (vein-bursting hell-thrash of the highest order!) offer so many joyous moments of infernal metal excitement that it may be hard to resist the urge to leap to one's feet and start cheering at the album's triumphant close.

As with all enduring metal subgenres, black metal remains a hugely malleable thing, but NECROPHOBIC keep proving that sticking to the script — and doing it with more intensity than just about anyone else — is still the most exhilarating way to plummet into hell's depths.