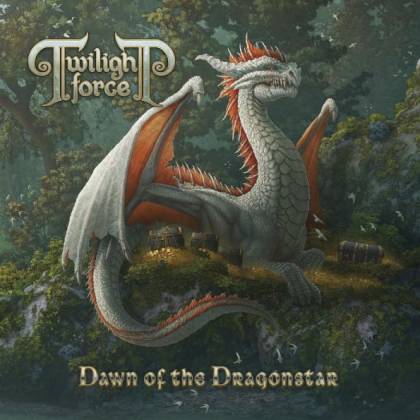 Dawn of the Dragonstar

You know what you're getting from a new TWILIGHT FORCE album. Ever since the Swedish crew emerged with 2014's "Tales of Ancient Prophecies", the ante for overblown, fantasy-based power metal has been robustly upped. They pulled off the same trick, albeit with even more bombast and pomp, on 2016's big-label breakthrough "Heroes of Mighty Magic"; an album full of demented musical ideas and wide-eyed joy, confirming that TWILIGHT FORCE are (a) out of their fucking minds and (b) touched by genius.

If power metal and dragons are not your thing, then do look away now. "Dawn of the Dragonstar" is heavy metal at its most willfully preposterous, extravagant and ambitious. It's cinematic in scope and bursting at the seams with inspired embellishments and orchestral flourishes, but as perky banjos burst through the melee in the rampaging "Thundersword", it's hard to deny that the Swedes' new album is also gently subversive, too.

It all starts with the title track, which would have been a relatively straightforward metal anthem in most band's hands, but TWILIGHT FORCE attack everything as if they're headlining a festival in Valhalla, which means that the arrangement is mind-bendingly intricate, the delivery breathtakingly precise and virtuosic and the production almost comically sparkling, pristine and powerful.

Even if you haven't got enough time in your busy life to plunge deep into the concept behind "Dawn of the Dragonstar", this is still a relentless joyride. One of TWILIGHT FORCE's great strengths is their ability to blend ripping power metal with orchestral oomph, but it's the way the orchestra is allowed to take center-stage at key moments that makes extended pieces like "With the Light of a Thousand Suns" so effective and affecting. As the latter reaches a triumphant crescendo, booming choirs and clanging percussion included, it all feels too big, too indulgent, to be regarded as power metal and nothing more. In a sense, it's nothing that BLIND GUARDIAN haven't done countless times before, but there is an identifiable dash of madness lurking in the TWILIGHT FORCE formula that marks them out as stealthy mavericks in an often-conservative genre. The twinkly-eyed, Disney-metal thump of "Winds of Wisdom" is the closest this record gets box-ticking, but even that veers off into quasi-classical territory, with wonderfully unhinged results. Did I mention how much fun this album is? There are so many jaw-dropping moments of self-indulgence that laughing out loud seems the only appropriate response.

If you need further convincing that "Dawn of the Dragonstar" is worth a punt, check out the closing track "Blade of Immortal Steel". The song is 12 minutes and 30 seconds of kaleidoscopic bombast and artful complexity, it's like HELLOWEEN's "Keeper Of The Seven Keys" deconstructed and rebuilt by Howard Shore and John Williams. With everyone involved on acid. In space. You get the general idea. Somewhere far, far over the top, TWILIGHT FORCE are ready and waiting for metal nerds of all stripes to get in touch. You will already know if that includes you or not. I'm off to ride a dragon.