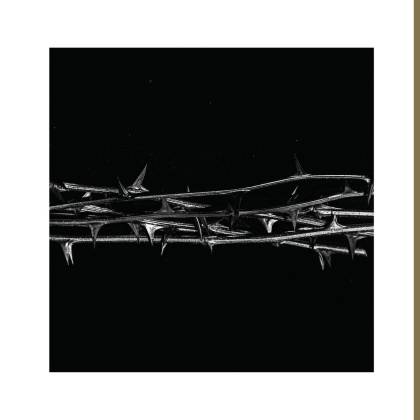 The apocalyptic sprawl of AMENRA's sludge-laden compositions is unremarkable to the world of heavy music. Where the Belgian collective has stood out during their twenty-year career is their ability to present their compositions with a powerful, sustained sense of emotional urgency no matter how expansive their musical journeys turn out. Even as most of their tracks near the ten-minute mark, the band's capability to juggle the quieter moments that they explore with a cathartic explosion of screams and riffs keeps the proceedings from feeling like pointless exercises in indulgence. Patience is required since their albums typically come off as suites to be consumed in a single listen instead of a collection of individual songs, but that patience is rewarded with an emotionally cathartic payoff.

AMENRA's latest record, "De Doorn", breaks away from their core albums' naming conventions, which have all been titled "Mass" followed by a Roman numeral. The group's new album continues their propensity for building slow-burning musical embers into bountiful sonic flames. This time vocalist Colin H. Van Eeckhout's reliably caustic screams are augmented by Caro Tanghe's (OATHBREAKER) chants and whispers. Van Eeckhout's shrieks are some of the genre's most blood-curdling, and his breaks from those screams, to emit softly mumbled spoken-word sermons, often play as hauntingly as his louder cries, even if you don't speak a single word of the vocalist's native Flemish language.

The album-opening "Ogentroost" eases listeners into the new record with the strumming of a single guitar string. This is layered over a spoken-lyric passage before guitarists Mathieu Vandekerckhove and Lennart Bossu come in with a powerful wave of melodic doom riffs, followed by Van Eeckhout transitioning into an ALL CAPS SCREAM. The overall aura of escalating terror would be powerful enough as is, but the addition of layered siren-esque croons from Tanghe provide an additional layer of emotional climax to the track's closing moments. Tanghe's contributions are also paramount to the album's closer, "Voor Immer", which begins with a solitary bass strum from Tim De Gieter followed by Tanghe joining in to provide hypnotic croons. This all coalesces with Van Eeckhout's spoken passages before the album finally closes by swarming the listener with a wave of trudging riffs and screams.

The group's quieter moments lead inevitably to a torrent of heavier sonic excursions — a path trudged ever so capably in the past by other greats such as NEUROSIS and ISIS. The formidable guitar duo of Vandekerckhove and Bossu makes AMENRA stand out from the many pretenders slogging through the same beats. Their sound manages to find the perfect balance between sludgy ominousness and melodic doom. This juggling of mood and power is especially notable on "De Evenmens" and "Het Gloren", providing aural heft to the already menacing vibe that is perpetrated with those tracks.

AMENRA's sprawling compositions have long been wrapped in the aura of a spiritual ritual. "De Doorn" sees that aura enhanced by more forays into lyrics written in their native language, and the addition of Tanghe to their sonic blueprint. Many bands put on the pretense of presenting the soundtrack to the apocalypse, but very few capably balance the uncomfortable quiet of the calm before the storm and its subsequent thunder as much as AMENRA.