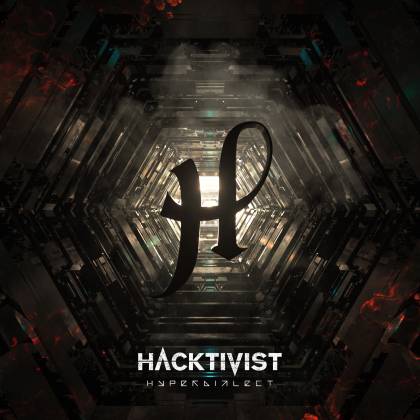 Sometimes the scenic route is the only available option. HACKTIVIST have a somewhat fractured history, with several false starts and interminable delays. After their first released material went viral, the UK rap-metal crew released a self-titled EP in 2012, before taking four long years to produce a full-length debut. After one triumphant European tour as main support to KORN, 2016's "Outside The Box" eventually emerged to slightly less hype and acclaim than it arguably deserved. Unfortunately, timing is everything, and the deafening buzz that accompanied the band's arrival had audibly diminished. Then, in 2018, founder and chief songwriter Timfy James quit the band, leaving a big question mark over their future.

Despite being one of the most exciting and groundbreaking bands to emerge from the UK in a long time, HACKTIVIST haven't yet had the impact that their sound — cudgeling tech-metal meets razor-sharp UK grime MCing — has always threatened. That must surely change now, because "Hyperdialect" is an absolute fucking monster. With new guitarist James Hewitt leading the charge with a bewildering avalanche of neck-snapping riffs, and co-vocalists J. Hurley and Jot Maxi sparking off each other with thrilling, ragged intensity, this is immediately recognizable as a completely upgraded and turbocharged enterprise. For starters, "Hyperdialect" is insanely heavy, eschewing the often-sterile sheen of the post-djent set in favor of speaker-levelling, bass-heavy crunch. Opener "Anti-Emcees" is a ferocious statement of intent and swiftly establishes that HACKTIVIST have refined their songwriting and cranked up the brutality simultaneously. The moment when blastbeats erupt toward its end has to rank as one of 2021's most insanely exhilarating. It should also make you wonder why anybody needs a nu-metal revival, when rap and metal are being combined with such mercurial, forward-thinking brilliance here.

This band's sonic world continues to steal gleefully from electronica and hip-hop, but where the debut album offered an intricate jigsaw with numerous explosive moments, "Hyperdialect" comes across as one monstrous, unstoppable entity, with every musical element locked in and focused on maximum destruction. When the clangor recedes for J. Hurley's lengthy monologue during "Lifeform", it's a rare moment of atmospheric showiness, made vastly more effective by its uniqueness.

In every other respect, HACKTIVIST are wholly focused on causing chaos and breaking necks: "Armoured Core" is iron-plated and rampaging rap metal in excelsis, with telling echoes of RAGE AGAINST THE MACHINE in Hewitt's arsenal of squeals and scrapes; "Currency" is a glitchy barrage of viscous post-metal slurry, underpinned by rasping synths; "Planet Zero" is a blistering, quasi-industrial groove metal tsunami with Hurley and Jot Maxi both losing their minds, lost in the eye of the storm; "How Dare You Exist" channels boiling point belligerence via an ingenious blend of skittering hip-hop beats, eccentric jazz-metal tangents and balls-to-the wall brutishness. And if you're not completely exhausted or nursing a broken neck by the time cataclysmic closer "Reprogram" kicks off, you should consider yourself very fortunate.

In truth, and despite the circuitous route taken to get here, "Hyperdialect" crackles with the frenzied excitement of a debut album. Metal's complicated relationship with rap music hasn't always led to enduring work of great quality, but when the combination clicks and the intent behind it is righteous, the results are undeniably electrifying. HACKTIVIST are reborn and this album will crush you like a slug. Enjoy.