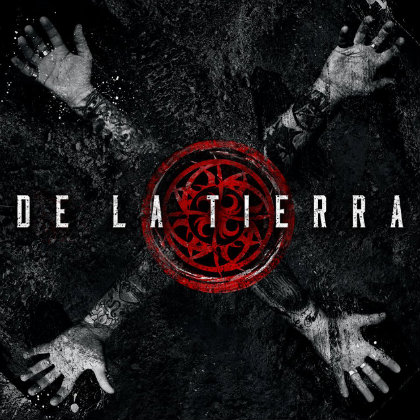 Welcoming Andreas Kisser back into the Roadrunner fold, the label brings aboard the SEPULTURA guitarist, aligned with South American artists Andres Gimenez (A.N.I.M.A.L.) and Flavio Cianciarulo (LOS FABULOSOS CADILLACS) plus Alex Gonzalez from Mexico's MANA. Together, they form DE LA TIERRA (aka D.L.T.),an aggro-metalcore unit bearing harmonic choruses with lyrics sung mostly in Spanish and some in Portuguese.

As Kisser and company sound like they're still working out the kinks under their Latin alliance, you'll hear only shades of SEPULTURA lurking about DE LA TIERRA's self-titled debut. Instead, the collective comes off more like a stripped-down hike of "Primitive"-era SOULFLY and ILL NINO without the latter groups' tribal supplements. Except for the shaking roots pulse during the intro and breakdown of "San Asesino" and later subliminally planted into "Maldita Historia" and "Chaman de Manaus", D.L.T. all but vacates the earthy percussion that's played a big part in Andreas Kisser's songwriting repertoire. Interesting choice when you consider "de la tierra" is translated to English as "from the earth." Perhaps DE LA TIERRA didn't wish to play into what could be perceived as a cliché, but there's no denying the cadence that traditional Latin percussion has brought to SEPULTURA, ILL NINO and SOULFLY before Max Cavalera likewise ripped them away.

Instead, the songs here are more basic, structured to ride along metallic riff jams leading to melodic upswings on the choruses, all of it becoming monotonous after a few songs. The opening instrumental "D.L.T.". serves as an official announcement of this union, sounding like an anxious prelude to a desert duke-out. Unfortunately, that anticipatory feeling of chariness is undermined by the predictable metalcore plugs of "Somos Uno" that's repeated in theme throughout the album. Incredulously, "Somos Uno" is concluded by awkward guitar tugs that gnash like duck quacks.

DE LA TIERRA designs the majority of their verses to rely upon meandering chug patterns hijacked from metalcore breakdowns with expected switch-ups to tuneful refrains. "Somos Uno" and "Detonar" are two examples, and SEPULTURA fans may be taken aback by Andreas Kisser's settlement for simplicity. However, the riff chunks huffing through the verses of "Maldita Historia", the first single from this album, are lobbed right out of SEPULTURA (ditto for "Rostros"),even if any hope of thrash can be dismissed.

Andres Gimenez, who sidles up to Kisser as a second guitarist, also serves as the group's primary vocalist. The script of DE LA TIERRA's songs has him grizzle through the verses and then switch up to quasi-cleans on the choruses. At times, Gimenez is charismatic, while he woofs and yowls his lines to match the brackish tone of "Chaman de Manaus".

The main issue to this album is that D.L.T. is trying to dirty up that which is heavily dependent upon harmony and they don't quite hit the mark in many spots. On the positive side, songs like "Corran", "San Asesino", "Fuera" and "Rostros" come together tightly with all parts keeping time and making solid use of rhythm. As if to beg pardon of their audience, D.L.T. ends their album with a feverish thrasher, "Cosmonauta Quechua", which may come too late for some listeners, but is still the right way to finish, on a high note.

One of the pluses to D.L.T. outside of some terrific guitar solos and durable drumming from Alex Gonzalez is bassist Flavio Cianciarulo, who resounds all over the place, but his shining moment comes via his tasty funk lines on "San Asesino". He represents the opportunity for future growth in this band if they choose to go beyond this album. If said choice is to take more than one ride with DE LA TIERRA, the band will need to ditch the chop-pop formula that presides over this album and go for broke. The talent is certainly a selling point to this band, which is why is most listeners will come to this album expecting more than it pays out.