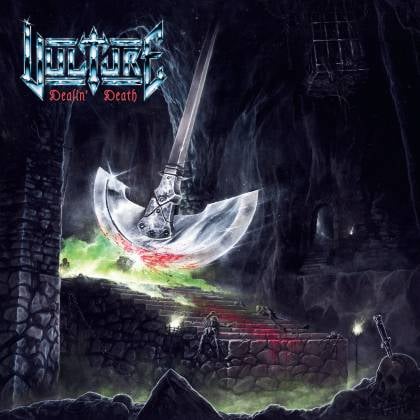 As hard as it is to define what separates admirable authenticity from deft pastiche, VULTURE have seldom invited the question. As with everything the Germans have done over the last six years, "Dealin' Death" exists primarily to breathe fresh life into the peerless sounds of the '80s metal underground. But while there are countless bands taking a similar approach, very few of them have either the songwriting chops or the inarguable conviction that this band keep delivering in massive, choking quantities.

Almost exactly two years on from the thoroughly ripping "Ghastly Waves & Battered Graves", VULTURE's third full-length gets everything right while sounding like it was an absolute blast to make. From frontman Leo Steeler's feral yelp to the constant barrage of defiantly old-school riffs, the sonic territory is the same as ever, and yet somehow the Germans have penned their most imaginative and eventful batch of songs to date. "Malicious Souls" is an instant rivethead-rouser, with a pounding, none-more-thrash chorus and some sublime twin-lead action. Almost POSSESSED-like in its heads-down intensity, it's another great example of how VULTURE simply play with more aggression and instinct than many of their retroactive peers. "Count Your Blessings" repeats the trick, but with some gnarly, VENOM-like overtones and some neatly SLAYER-ized discord in the riffing. Elsewhere, more epic material suits VULTURE well, as they embrace doomy grandeur and NWOBHM grit. In particular, "Gorgon" is a master class in ragged horror, with melodic backing vocals piercing through the excoriating deluge to greatly dramatic effect. "Star-Crossed City" is even better: an act of joyous heavy metal purity, it slams together shades of EXCITER, early GRAVE DIGGER and even DIO-era BLACK SABBATH into a single, magical shower of bloodstained denim.

The quality is maintained throughout, with everything from the "Hell Awaits"-saluting clatter of "Flee the Phantom" to the title track's raging, hook-stuffed assault offering multiple moments of fists-in-the-air euphoria. Like all great metal bands, VULTURE know exactly how to balance goofiness and intensity, and the closing "The Court of Caligula" is magnificent proof. Quite possibly this band's finest moment to date, it's a knowingly dark, dastardly and gently MERCYFUL FATE-like tale of wicked deeds that might even have some faint resonances in a modern context. You never know. But even if journalists do read too much into the finer details of "Dealin' Death", the notion that this is another fantastic record from a truly great band is hard to dispute. VULTURE get it. Act accordingly.