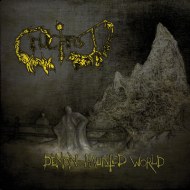 I'll give 'em this much, they picked a fitting name for the band. The music isn't too shabby either. As if Danny Lilker's resume wasn't long enough (BRUTAL TRUTH, NUCLEAR ASSAULT, etc),he joins members of doom merchants ORODRUIN in CRUCIFIST, an act that puts an even uglier face on a style shared by VENOM, BATHORY, CELTIC FROST, and HELLHAMMER, occasionally mud bogging down a private road owned by AUTOPSY. It's not the stuff of mandatory purchase, but it does the trick for those worshiping at the altar of the anti-slick.

It is a sound that rumbles through the lower intestine and blasts out the….well, you get the idea. As always, Lilker's presence is a large part of that, his bass lines thick and gooey, whether snaking through and around the riffs or crawling along the bottom like a serpent. Intentionally or not, vocalist John Gallo does a mean Cronos impression, the central element of a style that borrows most heavily from VENOM. From instrumental hell-gallop "Pursuit of the Pious" through album-closer "Anus Mundi" the attack bludgeons melody, opting for morbid feel and menace. "Witchgrip" detours a bit with a pronounced injection of doom that includes a vocal shift away from pure grit and the cover of ANGEL WITCH's "Angel of Death" is just plain cool. It is the above mentioned "Anus Mundi" that stands apart from the rest though due to its more pronounced AUTOPSY influence and varied compositional approach (Lilker's work is especially noteworthy here). It might even provide a hint of what comes next (if that ever happens).

In the end "Demon-Haunted World" is a good time for those needing a fix of the dark and grotesque the way it was delivered when "black metal" was an unspoken feeling rather than a sub-genre, even if it doesn't always impress in the songwriting department. It is a good throwback album and a generally solid effort. A live performance would undoubtedly be most appealing.