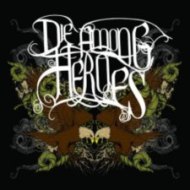 Potential is a tricky thing to notice. Sometimes it just takes one really well-delivered chorus, or a particularly catchy guitar hook, on an otherwise by-the-numbers musical death march, to give you pause, make you re-evaluate the band and at least see their possible future greatness. For me, and for these utterly textbook metalcore kids, my moment came in the chorus of "Perish What Ignites the Flame" (one of those post-1999 song titles so stupid and nonsensical, it almost forces you to dislike the song). The chorus is just perfect, a plaintive clean vocal backed with the sort of guitar melody that can still, even after a decade or more of abuse by this genre, raise the hairs on the back of your neck. In that one moment, what had seemed like a throwaway effort by some too-little-too-late scene kids suddenly showed a bit of promise.

DIE AMONG HEROES probably are too little and too late — they're mining ground that was played out in 2005. But they put everything into this earnest little EP (six songs, two interludes). It looks great, it sounds great, and even when it's maddeningly typical, it's not bad. And in a few isolated moments when they're firing on all cylinders, it's possible to believe that maybe the last seven or eight years haven't happened after all, and that this band could really change the world. The feeling is fleeting, sure, but it's there, and that's more than a lot of bands will give ya in 23 minutes and change.

I'm not trying to be a dick to these guys. There are 100 other bands at their level right now, equally devoid of originality, but DIE AMONG HEROES got this little bit of attention because, despite their lack of identity, there's something here. There's a little bit of that indefinable oomph that can overcome a lot of shortcomings and make you eager to see where a band goes next. It might not be a bad idea to keep an eye on these fellas; they have a way to go yet, but with this EP as a launching pad, their next efforts could be something special.