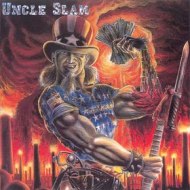 Having missed this completely when it came out, my only exposure to UNCLE SLAM being tepid final album "When God Dies", I owe Matt at Tribunal a big debt for resurrecting this moldy oldie. On the face of it, you could say that this west coast crossover thrash fell through the cracks back in the day for a reason — after all, SUICIDAL TENDENCIES and EXCEL held down the fort just fine in this department, to say nothing of the scads of east coast bands mashing hardcore and thrash together like a boot to a face at a CBGB matinee. So who cares about one more band of this ilk?

But give 'em a fair listen — maybe skipping the goofy, dated "Micro Logic" — and get yourself back into that painter's cap-and-hightops mindset, and you can't help but be charmed by this trio's give-em-hell attack. There's some surprisingly meaty guitar work going on here, with ripping solos and a vicious bite and technical flair to the riffing. A song like "Up From Beneath" is all business, no corny skate-core parts to be heard, almost European in its relentless thrashing and galloping double-kick midtempo bridge (it's almost like an early CORONER tune, and that's a high compliment). The vocals are fairly standard wild-eyed dude-thrash proclamations, with enough punk edge to keep the band firmly rooted in their SoCal half-pipe environs, but the added focus and intensity they bring to the table makes them stand a cut above their contemporaries of the day.

They're a different beast than their Bay Area brethren, seemingly less fawned over by the various waves of retro-thrash that have come and gone since they walked the earth. But you can slot UNCLE SLAM next to bands like CRUMBSUCKERS, M.O.D., NUCLEAR ASSAULT, and EXCEL — groups that may not have changed the world as we know it, but who had some great jams, took influence and humor from punk and early hardcore, and who deserve to be remembered. These guys may go down in history as SUICIDAL TENDENCIES's farm team, and they were, but there's more to them than that. "Say Uncle" should, at the very least, stand as a minor-league contender in the era of "Among the Living" and "Peace Sells", well worth your time if you're anything but the most casual dabbler in 1980's thrash metal. I dunno if I could go so far as to chant "say uncle... or die!!!", but I'd at least advocate a swift kick in the ass for anyone unwilling to enjoy this enthusiastic slab of history.