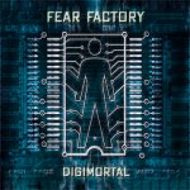 On their fourth album, industrial/death kingpins FEAR FACTORY have taken the unique and dynamic sound that they've established on their first three albums (not including a couple of remix releases) and basically streamlined it down to the bare essentials, creating a compact and fast-moving effort that doesn't break any new ground but, in some ways, may be the band's most accomplished recording yet.

In an age where artists routinely make albums that last over an hour yet contain, if the listener is lucky, maybe twenty minutes of good material, Digimortal clocks in at a tight, brisk forty-three minutes. And not a moment here is wasted: the band plows through eleven cuts with urgency and confidence, not veering much from the formula that has made them one of the biggest underground bands of the last decade, yet perhaps, by virtue of their economy, delivering some of their catchiest material yet.

Opener "What Will Become", with its direct groove and instantly memorable refrain, sets the pace for the rest of the album, which is marked by perhaps the widest range of vocals yet delivered by singer Burton C. Bell. The rest of the band also gives sterling performances, with the amazing footwork of drummer Raymond Herrera once again setting him apart from many of his contemporaries.

Lyrically, Digimortal is a familiar concept piece about the struggle between man and machine, a theme that may be growing a little old at this point. But that aside, FEAR FACTORY have produced yet another gem of industrialized metal—a little sleeker and more stylish, perhaps, but never straying far from the band's well-loved trademark sound.