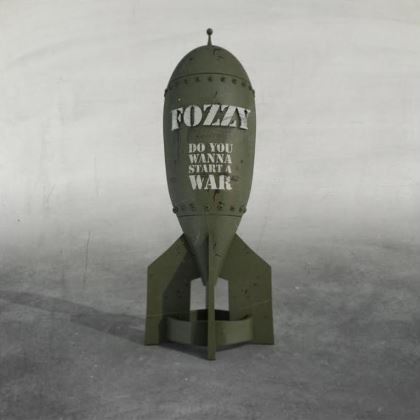 Do You Want to Start a War

WWE legend Chris Jericho returns once again with his STUCK MOJO, ADRENALINE MOB and DANGEROUS NEW MACHINE cohorts in FOZZY, and what began initially as a novelty has, wakey wakey, turned into a viable commodity. Jericho (call him "Mongoose McQueen" or "The Ayatollah of Rock 'n Rolla" if you like) has tirelessly put his efforts into FOZZY, as if to prove this is a no joke band. Now rolling out their sixth album, "Do You Want to Start a War", the FOZZY posse continue gunning for an agro-pop sound, which produces some expected vibes and a couple of variants.

The title track opens the album as a rolling, banging anthem you figure is tailor-made for a Jericho entrance theme. By now, he and FOZZY have their game nailed down. Whether you're a fan or not, there's a sense of professionalism behind this act that makes "Do You Want to Start a War" at least sound hefty and addictive. Paul Di Leo's funky bass lines trolling through the chorus are a great touch, as well.

"Bad Tattoo" rolls in with a dirty guitar lead and maintains a raw presence behind what comes off like a stepped-up BLACK SABBATH homage, at least on the choruses. Jericho efficiently snakes his way through the slower punching riffs of the verses and hilariously itches about a sour relationship that's like a, well, you know. "Lights Go Out" is obviously filled with as much wrestling allegory as sex, and even with the electro supplements, the crunch chords are turned way up as Chris Jericho hits some of his higher pitches. By a more commercially-broken band, this would've been fodder, but FOZZY keep things grimy instead of slick and "Lights Go Out" becomes a tuneful asskicker.

"Died With You" steps things back a notch to a weave a modern take on the power ballad. While not the most exciting track on this album, there's an appreciable air of tightness and backend grit that overrides the obviousness of it. "Tonight" afterwards tosses out a straightforward rock 'n roller with modified punk rolls on the trailing riffs. As FOZZY are hardly shy about bringing aboard guest performers, "Tonight" features an appearance by STEEL PANTHER vocalist Michael Starr.

Both of these songs are apparent strategies to shake things up a bit in the FOZZY world, since "Brides of Fire" roars straight out of them with one of the most aggressive attacks on the album. Chunk rhythms, belting riffs and even some dominating growls from Jericho surround a prototype hum-along chorus. "Brides of Fire"'s screeching guitar solo, planted overtop a breakdown, is a pretty wicked set-up to the final bars, which increase speed for a moment before stomping to close.

The album's lead single, "One Crazed Anarchist", should have FOZZY's faithful banging fists with a mid-tempo punch on the verses, even if the sugary choruses and Jericho's ralphing of the title undermine the slinking wah grooves that gives the song its base personality. In other words, the dig for accessibility gets in the way of what could've been a nasty-cool number. The ploy works better with the accompaniment of Christie Cook's powerful femme leads to Jericho's amenable rolls on the conqueror's anthem, "Unstoppable". This one's a well-dished hip shaker that could've gone straight to the fore as the album's launch single — even if the song belongs more to Cook than Jericho, who nearly gets drowned out by her.

"Scarecrow" serves up some of the heaviest tones on the album with intermediate plunging riffs that temporarily muck the transition from moody to up-tempo as the song plugs along. If you're not used to FOZZY, you don't necessarily see it coming, which is to the band's credit, even if the bald-faced necessitation to chuck in a melodic chorus is a bow to the times in hard rock. "No Good Way" then lobs along with what FOZZY fans are expecting, a BLACK LABEL SOCIETY-inspired knocker (Jericho even pulls a few good Zakk Wylde impersonations on the verses) with uplifted, hook-oriented choruses. Stand by afterwards for an out-of-nowhere take on ABBA's Seventies' pop hit, "SOS". Frightening in proposal, but not bad at all in execution.

Obviously an expert in selling showmanship and spectacle as a professional wrestler under the McMahon brand, Chris Jericho sells FOZZY with a rocker's flash and astuteness for what the general population is dialed into. Sidebar, he's also a damned good pianist. "Do You Want to Start a War" is noncommittal fun to get your kicks to if you're so inclined.

Y2J is yesterday and ballroom dancing is assumedly a checked mark on his bucket list, but Chris Jericho's found a way to make his rocker persona in the squared circle live up to the hype by nurturing it to the hilt in FOZZY.