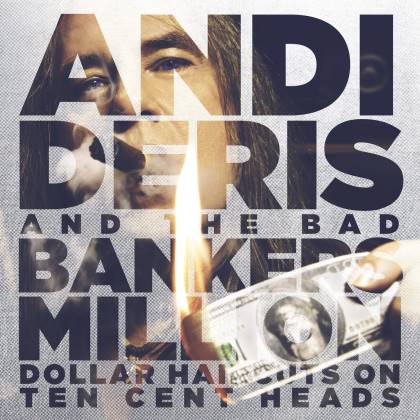 ANDI DERIS AND THE BAD BANKERS

HADES and NONFICTION guitarist Dan Lorenzo declared "F Bombs for Everyone" in his solo work. No doubt taking that solicitation as creed is HELLOWEEN vocalist Andi Deris, who releases his first solo album in fourteen years following 1999's "Done by Mirrors", the sometimes venomous and dirtied-down "Dollar Haircuts on Ten Cent Heads".

You can expect "Dollar Haircuts on Ten Cent Heads" to sound like HELLOWEEN like you can expect a Bruce Dickinson solo album to sound like IRON MAIDEN. What Deris and his house band (including Nico Martin on guitar, Jezoar Marrero on bass and Nasim Lopez-Palacios on drums) bring to the table are eleven songs of variation and only a couple that could remotely be worked onto a HELLOWEEN album (the melodic yet uncooked "Blind", for example). Deris has stated that so many songs he's written in the hopes of delivering another solo album ended up being used in HELLOWEEN, hence the length of time for the arrival of "Dollar Haircuts on Ten Cent Heads".

Deris' fans from as far back as his PINK CREAM 69 days should be well won-over by this album as he sets his target sights on the banking industry and the environmental rape by corporations for starters. The profanity slavers out of Deris' mouth on the opening number, "Cock", and the condemnations continue to fly on "Will We Ever Change" and "Banker's Delight (Dead or Alive)". While NUCLEAR ASSAULT remains the best metal band ever to lambaste big business in a go-green effort that long predates Al Gore, you have to appreciate how much Andi Deris cares.

On the brutally honest nature of "Cock", Deris explains, "Obviously we despise everything around banks, managers and bankers who are clearly responsible for the shit that goes on nowadays, and most certainly in our future, so it felt very good to vocally tell them what we think about them. Sure, therefore it's highly explicit but hey, who gives a fuck? That's what they deserve, and it helps the music to really kick some ass."

"Don't Listen to the Radio (TWOTW 1938)" carries an old lion's metal heart with a throwback anthem pound that would've spelled instant classic in the days of yesteryear. While there's a historical nuance to this song, the message is still abundantly clear: mainstream radio is crap served for sheep and clearly has no interests other than the profits of their sponsors.

Having the smarts to contain his more extreme vernacular to the spiteful tirade of "Cock", Deris dispenses with the raw vocab for the rest of the ride and instead serves up his esteemed vocals to the often agro metal presentations by his band. "I Must Be Dreaming" is inherently ugly with chunky riffs smooshing the verses and gnashed guitars slashing through the bittersweet choruses, but Deris lofts emotively with elevated altos. The song is polished despite its atavistic tones, ditto for the spectacular "The Last Days of Rain". In fact, the longer this album grinds on, the tighter and more spangled the songs become.

The irony to this project is while it gives Andi Deris the opportunity to tee off about global financial crises, even he will admit some of his tirades stem from personal dissatisfaction. This has nothing to do with HELLOWEEN, of course, and he ably separates "Dollar Haircuts on Ten Cent Heads" in sound for that very reason, to create a detached forum to regurgitate his external frustrations. Thus Deris finds a "creative peace" with this album where he doesn't "have to sit at home anymore listening regretfully to the demo tapes of those songs". The second half of "Dollar Haircuts on Ten Cent Heads" exhibits this alluded-to peace, most cathartically on the acoustic finale, "I Sing Myself Away".

Initially pissed-off in topic and in projection, "Dollar Haircuts on Ten Cent Heads" soon turns out a classy performance by Andi Deris, who has the veteran wisdom to know when to purge and when to entertain. He hasn't helmed HELLOWEEN for so long by mere coincidence.