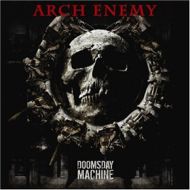 More of what you want from an ARCH ENEMY album, and a lot of stuff you may have found lacking in 2003's "Anthems of Rebellion", is present on the heavily-anticipated, apparently-titled-by-a-cartoon-supervillain "Doomsday Machine". The Amott brothers pile on the Swede-thrash riffs and lush '80s throwback leads like there's no tomorrow, drummer Daniel Erlandsson turns in a precision performance, and the production is clean and lethally heavy.

Angela Gossow has divided fans since she took over the vocal position from Johan Liiva after the "Burning Bridges" album. The fact that she's Michael Amott's significant other doesn't help her case in the eyes of detractors, and her harsh, staticky squall of a vocal often sounds excessively treated and computer-driven (never more so than on "Doomsday Machine", unfortunately). On the other hand, she's thus far resisted the temptation to "sing pretty" and thus remains the band's sole tangible anchor to extreme metal, the guitars long since having wandered off into melodic thrash territory with frequent excursions into AOR and pealing hard rock. Her voice is harsh, but accessible, bringing the band to a wider audience, and her up-with-people lyrics (while a bit cloying in large doses) are at least something different in the scene.

There seems to be a conscious effort on "Doomsday Machine" to throw a bone to those clamoring for a return to the ornate thrash sound of the past. While there's still plenty of guitar bedazzlement to be had (hell, just check out intro "Enter the Machine"),songs like the vicious "Nemesis" sport some dizzying fast picking riffs and tons of double-kick frenzy from Erlandsson. And the stuck-together "I Am Legend/Out For Blood" brings in a welcome thrash beat, plus a cool percussion-fueled break in the middle leading to some blast beats – who'da thunk it?

For the most part, though, songs like "Taking Back My Soul" point to business as usual in the ARCH ENEMY camp — an ear-friendly take on Swedemetal with emphasis on guitar showoffery, catchy and compact songs, and simple, midtempo structures. One minor annoyance is the reliance on electronic "ear candy" to propel some cuts — the pinging submarine sound in "My Apocalypse" gets old long before the song ends, and the weird little trill in "Skeleton Dance" (one of the album's weakest tracks) is right out of a cheesy video game theme.

Overall, the album leaves a pretty good impression, though it seems to be lacking a certain spark that made earlier efforts essential listening. Michael and Christopher Amott seem most motivated on "Hybrids of Steel", a borderline ridiculous instrumental that's right out of Japanese cartoon theme land. Other highlights include the stomping "Mechanic God Creation", "Nemesis" and the aforementioned "Out For Blood", a welcome injection of adrenaline into a record that occasionally slips into a midtempo torpor.

Those looking for the more vicious bite of earlier ARCH ENEMY will like this album more than "Anthems of Rebellion", but will likely still be left wanting more venom and less pop. And the "Angela sucks because she's a chick" contingent, if they haven't left behind their dickbrained views by now, are beyond help or hope. Those into that inimitable Amott guitar gloss, and the legions of new-era fans who like the band's more palatable recent direction, however, will likely crown this as their album of the year. Almost a 7.5 or 8, but it's just missing… something, you know?