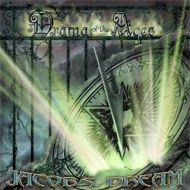 Drama of the Ages

Here's one for the dyed-in-the-wool classic metal fans who expect melody, a vocalist with range, involved arrangements, and plenty of guitar solos. At 71 minutes, JACOB'S DREAM feed you a meal o' metal that'll bust a gut on "Drama of the Ages", the Columbus, Ohio band's third full-length release.

More proggy than the average melodic metal album, "Drama of the Ages" is not a shred fest nor is it an exercise in mind-numbing compositional excess. Every note has its place. The music is well thought out and the melodies are infectious (though not power metal whiny),but it's the guitar work of Jon Noble and John Berry that really shines. The solos are passionate and often mesmerizing, while the twin leads are woven into the rather epic arrangements in a purposeful way that fits the song structure and never sounds forced. New guy Chaz Bond is a solid vocalist in the Geoff Tate mold and his lower, more sinister-sounding parts bear a slight resemblance to Warrel Dane. He's got a good sense of patterning (soaring, mid-range, gritty, etc.) that keeps the sometimes overly dramatic parts from becoming irksome. Sound-wise, the group's self-production gets the job done, even if the guitars seem a tad muffled and the bottom end could use more beef.

The disc takes a listen or two before you can really appreciate it. There's a lot to sink your teeth into here and while most of these tracks are not intended for the three-minutes-of-ear-candy crowd, there are plenty of memorable choruses (the title track probably the most obvious one). There's a good balance between the relatively stripped down fare of songs like "Stand or Fall" with its cool circular riff and old school QUEENSRŸCHE vibe, the more majestic and moody fare of "Spinning Leaf", and the tougher metallic moments of "Tempest", "Forever Winter", and "Third Way". Also worthy of note is the hidden track, a tasteful instrumental that is a good distance from filler material.

I've not heard the previous releases, so I can't say anything in the way of comparison. I can only point out that "Drama of the Ages" is a classy and intelligent work that packs a healthy metallic punch. It also sounds like an album created by a band with a passion for its craft. Maybe not one to knock the masters off their perch, but a pleasant surprise nonetheless.