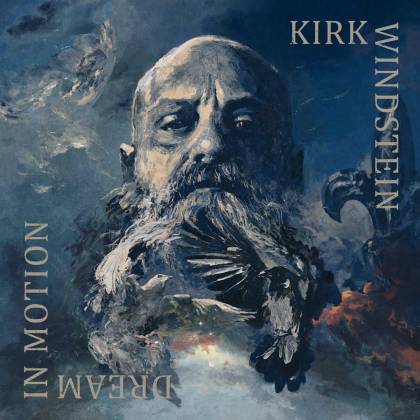 When Kirk Windstein strangles his guitar, the slow riffs sound as though they're literally being strummed beneath the surface of a murky Louisiana swamp, such is the magnitude of the slow and powerful delivery. The man, the myth, the legend is the mastermind behind NOLA sludge overlords CROWBAR, and it has been almost four years since we were battered by that band's last album, "The Serpent Only Lies". Fans may have a while longer to wait for another album from that band, but frontman Kirk Windstein has returned to at least partially satiate the thirst with his debut solo album: "Dream In Motion". Where this album may fail in directly satisfying fans of CROWBAR's brutal crunch is precisely the same area where it successfully bears fruit to something creative and inspirational. "Dream In Motion" boasts Windstein's more tranquil, introspective and melodic side that he has more fully embraced and expressed in recent years, in tandem with the more coarse, trademark approach and aesthetic for which he is known.

Thirty years after CROWBAR's launch, ringleader Windstein has finally gone out on his own in the truest sense. CROWBAR — a thunderous, distinctly Southern kind of blues 'n' doom poured through a punk-rock filter — is marked by an energized eighties hardcore stomp that weaves in and out of brooding, depressive and passionate doom metal. "Dream In Motion" invariably exhibits obvious traits of CROWBAR, yet it's essentially the beauty to CROWBAR's beast.

Make no mistake about it, however, Kirk hasn't pulled out an acoustic guitar to play folk songs and "Kumbaya My Lord" at the campfire. And for the Neanderthal's itching for the bombastic, head-nodding riffs one would expect from him, "Toxic" serves to remind us that we are, after all, listening to an album by the man predominantly responsible for such CROWBAR classics as "Like Broken Glass" and "I Feel The Burning Sun". But "Dream In Motion" is a separate canvas for the burly frontman. Windstein's debut solo album is just as massive emotionally, and even sonically, as CROWBAR. It's just that the intent is far removed from aggression and violence.

On the evocative title track and elsewhere, he has eschewed his signature guitar crunch in favor of soulful passages that are graceful and dreamlike in the vein of the mighty BLACK SABBATH and TROUBLE. There is a deep sense of mourning and survival at the heart of "Necropolis". He has explored the possibilities offered by his melodic vocals for the better part of 20 years, but his crooning has never sounded as heartfelt as it does now. That singular, distinct voice shines bright on "The World You Know"'s slow doom crawl in a memorable way that needed to be compartmentalized apart from the CROWBAR template.

There's a sense that "Dream In Motion" is a collection of disparate, creative stabs into the universe. This makes perfect sense from the artist's vantage point toward the end goal of self-expression, yet the album does lack a sense of cohesion. None of this changes the fact that "Dream In Motion" is compelling and enjoyable throughout. Windstein's first solo effort may not move mountains, nor is it likely to be revered in the way that CROWBAR's work is, but this passionate release is worth spinning repeatedly in its own right.