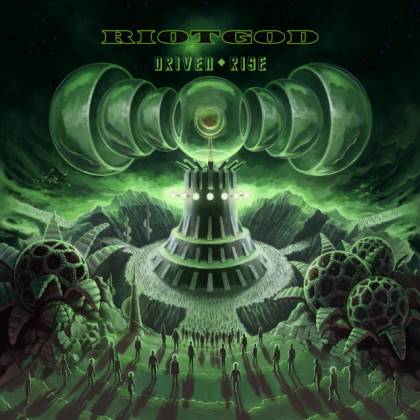 Bob Pantanella is one busy dude, dividing his time between MONSTER MAGNET, THE ATOMIC BITCHWAX, CYCLE OF PAIN and, of course, RIOTGOD, which he formed in 2007 with ex-bassist Jim Baglino. It helps Pantanella's cause to have guitarist Garrett Sweeny, recent arrival to MONSTER MAGNET, amongst his RIOTGOD arsenal along with vocalist Mark Sunshine and current bassist Erik Boe (also of BLACK REIGN),as his Jersey-based power pack delivers their third album, "Driven Rise".

RIOTGOD considers themselves a classic-styled hard rock band, "period" (to quote the band directly) with many of their fans readily sticking them with a stoner tag. LED ZEPPELIN and to lesser effects, LYNYRD SKYNYRD, play their hands in igniting RIOTGOD's distortion bombs, while Nineties American rock has also lent its subtleties. The latter all but carries "Driven Rise" from start-to-finish.

The temptation to liken "Driven Rise" to Layne Staley-era ALICE IN CHAINS will be hard to resist in many spots, even if there are gradual change-ups toward MONSTER MAGNET psych flares ("Prime Moment" and the final third of "Beg for Power") and the punk-driven ear blast of "Positronic" as the album progresses.

A lot of the ALICE IN CHAINS illusion comes from Mark Sunshine, who doesn't consciously pull Staley impersonations, but he coaxes impressions nonetheless. Accordingly, the song structures are leaned more toward nineties hard rock and grunge, i.e. "They Don't Know", "Melisandre", "Grenade and Pin", "Davos" and the title track. The songs are heavy enough to get a steady headbob to, if not an actual bang. Sunshine is an appealing vocalist who worms along with the mid-tempo grind of the riffs that carry the album, while Bob Pantanella escorts a reliable thud all the way through.

The curveball of the album comes with the acoustic-driven "You're My Waste of Time", akin to an Eighties power ballad that hits a few dark corners. The chords of the choruses are not what you're expecting and they grace the song instead of letting it turn schmaltzy, particularly once the electric guitars hop aboard and keep the tone emotive. The elongated guitar solo from Garrett Sweeney here is one the album's highlights.

"Driven Rise" isn't quite as classic-minded as RIOTGOD's previous works outside of the AEROSMITH and Ted Nugent-clubbed "Beg for Power", which mingles with morose ALICE IN CHAINS plunges on the edges of the verse lines and the choruses. "Davos" and other song spots are exquisitely tailored, but most of "Driven Rise" plays a heavy lean on the nineties, which is classic only if you consider grunge classic at this point.