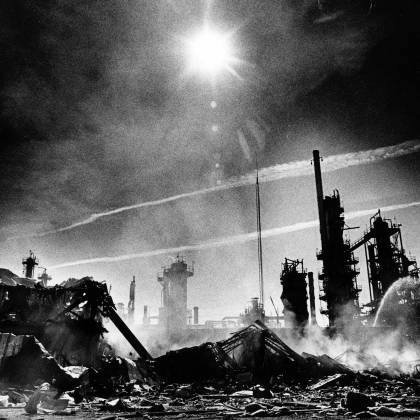 The fact that DROPDEAD's latest full-length album is eponymously titled yet again might suggest to the uninitiated that it's a meaningless placeholder for a band exclusively focusing upon the music. That couldn't be further from the truth, however. The Providence, Rhode Island-based unit takes Canadian communication theorist Marshall McLuhan's phrase, "The medium is the message," to a new level — delivering frontman Bob Otis's vitriolic words and sentiment through the injection and conduit of DROPDEAD's belligerent music right into listener's minds. The extent to which one will absorb and agree with the message may vary depending on who is listening, but the message is so in-your-face, no one can deny hearing it. The reason that they remain relevant and are still around three decades following their inception is because their passions burn bright, and they make it all sound so damn good.

Considering that DROPDEAD is driven by its members' sociopolitical concerns, highlighting issues such as animal rights and anti-authoritarianism, the release of the renowned band's third full-length amidst the current state of global chaos is certainly fitting. The band continues to deliver the manic hardcore punk and power violence for which they are known. "Dropdead" is a fine-tuned, relatively more diverse and dynamic take on what they've always done. The 24 minutes of the album are divided into 23 songs that are essentially explosive, politically charged outbursts completely void of pretense. There simply is no fat to trim. The music is just as concise and to the point as the scathing lyrical commentary.

"Dropdead" differs from the act's previous releases with its deeper exploration of tempo variety. "Book of Hate" churns along with a slower eighties hardcore groove, initially unraveling on the back of a repetitive, dramatic bass line that brings to mind the classic 1984 SIEGE song "Conform", a track that appeared on that band's "Drop Dead" demo/album from which they pulled their name. On the flip side, "Bodies" blasts forth with a brief, biting intensity akin to the spirit of NAPALM DEATH's "Scum". Elsewhere, "Hatred Burning" embarks with an old-school hardcore riff that is almost danceable prior to an unforgiving, full-tilt grind assault.

Otis's impassioned screams of yore remain, but they predominantly exist now as climactic punctuations. His primary vocal delivery has become even more well-enunciated and intelligible than it was before. It has become significantly more harmonious with the rest of the music as well. On "Abattoir Of Pain" the sincerity, angst and frustration in his voice is overwhelming: a song about the evils of factory farming. The lyrics might even resonate with a lifelong meat eater. "I was born into this place. It's all I've ever known. My bed is blood and excrement. In this kingdom made of bone. Screams of pain and torment are the hymns of those in hell. Death the only angel that will grant deliverance." Perhaps outspoken musicians aren't always preaching to the choir.