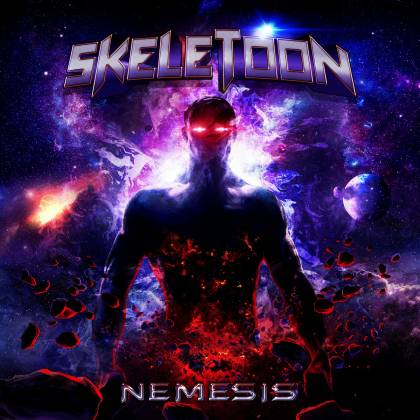 If you want gritty realism, heavy metal can provide. But if you want escapism of a distinctly ludicrous hue, heavy metal can provide that too, albeit with the necessary caveat that this stuff will really rot your teeth. SKELETOON are unapologetic in their fantasy fervor and melodic cheeriness. They reportedly began life as a HELLOWEEN tribute band, which probably explains their devout adherence to the Germans' upbeat approach, and "Nemesis" will indubitably satisfy those looking for some straightforwardly uplifting power metal — or, as the Italians would have it, "NerdMetal" — madness. This is a sonic realm of superheroes, fantastic beasts, triumphant warriors and obsidian spaceships, with countless nods to comic books and sci-fi that never feel contrived or too eager to please. It's obvious that SKELETOON are keen to plough their own furrow and, four albums in, cement their place as one of European melodic metal's quirkiest acts. Despite some perfunctory moments, "Nemesis" is full of big, bombastic and highly memorable anthems and a refreshing sense of individuality.

The best songs are eminently worth the price of admission and, for reasons unknown, are in a neat mid-album row. "Nemesis" itself is a crunchy, mid-paced melodrama; "Starseeker" is an epic, prog-tinged sprint to glory; "Cold The Night" is a wonderfully overwrought power ballad that would grace any high-camp Broadway show. That trio of gems aside, it's the eight-minute "Arcana Opera" that will linger longest in the memory: taking off at full speed, armed with a gleefully hysterical, octave-mincing chorus and extravagant choral backing vocals, it soon evolves into a grandiose, prog metal concerto, heavy with synths and windswept awe, before returning to another overpowering barrage of posi-vibes and speed metal clatter. Similarly, "The NerdMetal Superheroes" delivers its promised silliness and tons of AOR-friendly sing-along spirit, nudging "Nemesis" into the realms of, oh I don't know, über-cheese? That sounds about right.

Once again, forewarned is forearmed. SKELETOON are here with the specific aim of making metalheads happy, whether by melodic means or just sheer, irrepressible gusto. "Nemesis" is distinctive and rewarding on several levels, but it is plainly not for everyone. If too much happy makes you want to commit murder, perhaps you could avoid this one. For everyone else, this is like a Sunny Delight enema, sent direct from the future. Or whatever.