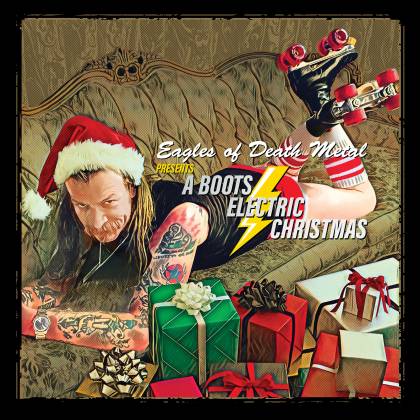 EAGLES OF DEATH METAL's backstory is littered with anecdotes. Some are unexpected, like the fact that frontman Jesse Hughes was once an activist involved with Sonny Bono's 1992 Senate campaign. Unfortunately, though, one page from the act's history is utterly tragic. On the Paris date of their 2015 tour, terrorists claimed the lives of 89 people, including show-goers as well as the band's own merchandise manager, in a senseless attack. But, thanks to the likes of EAGLES OF DEATH METAL, rock and freedom can't be held down. The rock 'n' roll heathens now return with their Christmas themed EP, "Eagles of Death Metal Presents A Boots Electric Christmas", and Paris is, in fact, on the band's itinerary for their early 2022 European jaunt that's a part of EAGLES OF DEATH METAL's 24th anniversary tour.

In spite of the project's moniker, which was a playful joke more than anything, EAGLES OF DEATH METAL is anything but a death metal band, and "Eagles of Death Metal Presents A Boots Electric Christmas", a genuinely soulful and uplifting Christmas album, is quite a departure from the band's template. This six-track EP is soaring, wholesome and heartwarming. Here Hughes puts on his raunchy alter-ego "Boots Electric"'s skin suit, yet there's a much more vulnerable and stripped-down aspect of his essence that's clearly underpinning this half dozen songs. The entire EP is enjoyable, however tracks like "God Rest Ye Merry Gentlemen", "Little Drummer Boy" and "Little Town Of Bethlehem" are noticeably more memorable, full and lush. The release's highpoint, an a cappella rendition of "O Holy Night" featuring the truly emotionally stirring vocals of both Hughes and Homme, is its grand finale.

EAGLES OF DEATH METAL always have a casual approach. It's just who they are. It's how they roll. But this Christmas EP is, in the best sense, a novelty item. If the band's music is typically fit for the strip club or dive bar, "Eagles of Death Metal Presents A Boots Electric Christmas" sits beside the rest of the band's catalogue. It feels as though it's meant for an elementary school Christmas show or a Christmas festival.