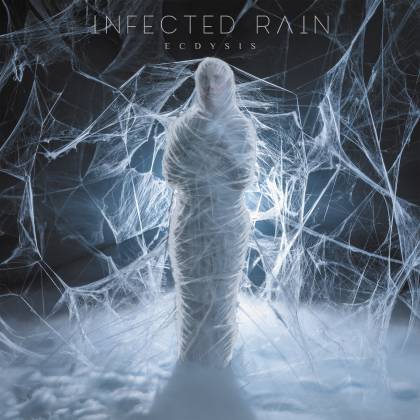 Frequently tipped for greatness, and not just because vocalist Lena Scissorhands looks more like a rock star than just about anybody else on the planet right now, INFECTED RAIN have a sound that seems to chime perfectly with mainstream metal's current predilections. Broadly speaking, the Moldovans have been ploughing the same musical furrow throughout their 14-year existence, blending elements of nu-metal, metalcore, and alternative rock, whilst shrewdly evading categorization in the process. But with numerous bands exploiting the grey areas between the aforementioned subgenres, often adding more brutal and uncompromising elements along the way, "Ecdysis" seems both incredibly timely and oddly distinctive. Not much has changed since their last album, the equally excellent "Endorphin" (2019),but INFECTED RAIN sound like the right band at the right time, right now.

Again, it helps that Lena Scissorhands has a killer voice, with all the scream-to-sigh versatility that most modern metal demands, but these songs are very much more than the sum of individual parts. INFECTED RAIN are hitting their stride here. Songs like the pugilistic and pummeling "Fighter" and the grubby, unpredictable groove metal of "Longing" cover a lot of musical ground, despite their in-built succinctness, and no idea outstays its welcome. The heroically gnarly "Goodbye" begins with the kind of lurching, slavering riffing that you would expect to find on a WILL HAVEN record, and the sumptuously melodramatic and melodic chorus that follows makes sublime, if perverse sense. Similarly, "Everlasting Lethargy" has a split personality, veering from sludgy, slug's-trail horror to bewitching post-rock-cum-trance-pop ambience like it was the most natural thing in the world. "Showers" repeats the trick, but with shades of state-of-the-art symphonic metal, a gentle whiff of gothic grimness and a hammering, blackened hardcore denouement. Most startling of all, "Nine, Ten"'s woozy electro fever dream is a wonderfully delicate and disarming touch.

Not everything hits with the same intensity. "November" flatters to deceive with an initial flurry of skittering electronics, but its melodic payoff is a disappointment; "The Realm of Chaos" tries slightly too hard to be the heaviest song on the album. But when INFECTED RAIN snap into rulebook-torching, stylistic anarchy mode, as they do on the schizophrenic ebb and flow and giant hook-wielding of "Never the Same" and the stately pomp and proggy hues of the closing "Postmortem Pt.2", they sound like a band with almost inevitable and massive success looming over the next horizon. Or possibly the one after that. Either way, "Ecdysis" crosses the streams with class and conviction.