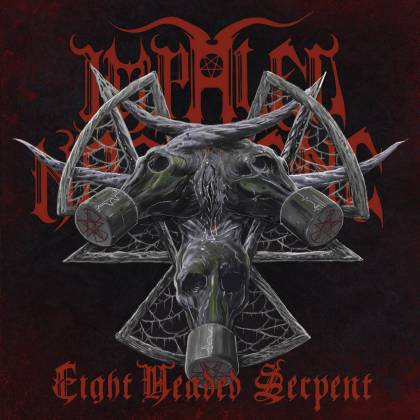 IMPALED NAZARENE isn't a common name in the sphere of mainstream heavy metal music, not by a long shot. But with that said, they're much more than a footnote in guitar virtuoso Alexi Laiho's history. (CHILDREN OF BODOM's recently deceased frontman wielded the six-string axe for IMPALED NAZARENE between 1998 and 2000, culminating with the excellent album "Nihil".) Anecdotes aside, the key figure of the legendary black metal band is frontman Mika Luttinen. Since 1990 the charismatic heavy metal antihero has helmed the ship proudly waving the flag of hate. IMPALED NAZARENE is one of the most important enduring black metal bands, and the unit has returned with its 13th full-length album "Eight Headed Serpent". It's a 13-track black metal banger chockfull of frantic blast beats and evil riffs and tremolo picking that provide a disinterred backdrop for Mika's maniacal howls and shrieks.

The madness of Norwegian black metal's church-burning, murder and suicide is a popular chapter of heavy metal lore, and IMPALED NAZARENE's Finnish stomping grounds were and are just a hop, skip and jump away. The Norwegian black metal scene's activities were nefarious, to be sure, but there and elsewhere a tendency has existed for people to embellish stories. In a nutshell, there are an abundance of disingenuous tryhards. The gentlemen of IMPALED NAZARENE were antagonistic toward the Norwegians in their early days, suggesting that they were fearless and not afraid to walk their own path, evident with their nationalistic themed third release: "Suomi Finland Perkele" (1994). Most importantly of all, IMPALED NAZARENE forged its own way musically from the get-go, and they went against the grain in 1996 with the hardcore punk-fueled "Latex Cult" album. That snarly and chaotic punk quality has remained ever since, painfully clear on the mid-paced bludgeoning of "Eight Headed Serpent"'s "Octagon Order" and "Human Cesspool".

The new effort also digs deep into IMPALED NAZARENE's tried-and-true black metal roots on "Metastastizing and Changing Threat", a song that also reflects the band's grindcore tendencies and inclination toward evil energy that stands neck-and-neck with "Panzer Division Marduk"-era MARDUK. "Debauchery and Decay" bridges the gap between IMPALED NAZARENE's passions for black metal, hardcore punk and grindcore, as well as melodic, classic heavy metal. The entire release is a blitzkrieg assault of nuclear proportions, with "Triumphant Return of the Antichrist" standing above the rest due to its anthemic nature and unhinged, up-tempo approach. The most atypical song is the finale, "Foucault Pendulum", a number that opens up with a doom-like dirge that's melodic at times.

It has been a long seven years since IMPALED NAZARENE's last effort: "Vigorous and Liberating Death". The band that is obsessed with nuclear warfare, goats and perversion has returned in a big way with "Eight Headed Serpent". Will the album be revered as much as 1992's "Tol Cormpt Norz Norz Norz…" or 1993's "Ugra-Karma"? Probably not. But "Eight Headed Serpent" is exactly what longtime fans have been craving: an unapologetic fast-paced, raging album that's filled with attitude.