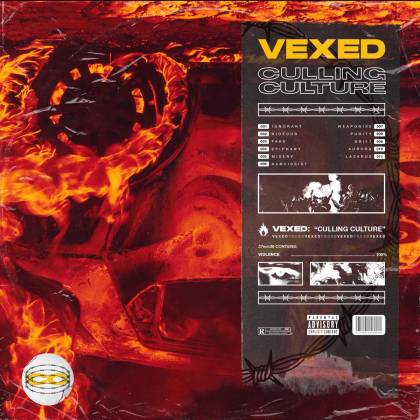 While much of the metal mainstream talks to itself about a nu-metal revival that isn't really happening, we can at least be thankful that crushing new bands with a commercial edge are still emerging. With a sound that blurs the lines between deathcore, metalcore and tech-metal to such an extent that everything sounds sharp and fresh, and nothing sounds truly derivative, VEXED sound like the destined-for-hugeness, finished article on "Culling Culture". As an added treat, this album never sounds remotely cynical or tailored for some algorithm-dictated demographic. Instead, this is vibrant and vital modern metal, wherein brutality dominates but melody has regular access. It's also worth noting upfront that frontwoman Megan Targett is a self-evident force of nature with an abundance of charisma and a huge vocal range, throat-scything roar included. An opening trifecta of "Ignorant", "Hideous" and "Fake" makes it irrefutably clear that VEXED have the right stuff: there may be nothing revolutionary happening here, but "Culling Culture" slams and stabs in a way that we haven't necessarily heard two thousand times before.

There is a nasty, lurching quality to many of VEXED's heavier moments, and "Fake" is particularly barbarous in that regard, its final, lethargic sledgehammer raid stuttering to a grim halt. Similarly thunderous but blessed with soaring hooks, "Epiphany" is no less uncompromising and pulls off a lot of intricate rhythmic tricks along the way, while also brashly showcasing Targett's impressive voice amid a swell ofFAITH NO MORE-esque pomp.

A perfect song for the present day, "Narcissist" takes VEXED into angular and swivel-eyed territory, their singer's machine-gun spitting underpinned by obsidian sludge grooves and ruthless ensemble precision. Similarly, "Weaponise" takes a path of languorous, lead-heavy violence and seems to almost revel in its blitzed-out, monochrome obtuseness. In contrast, "Purity" and "Aurora" are unapologetic in their anthemic intentions, with big, radio-friendly choruses and perhaps a little less of the previously dominant snarling ugliness. The closing "Lazarus" reels the fury back into some degree, but VEXED end their debut sounding considerably more liberated than at its start. In truth, they could speed off in any number of potential directions from here, armed with an exhilarating new hybrid that is frequently impossible to resist.