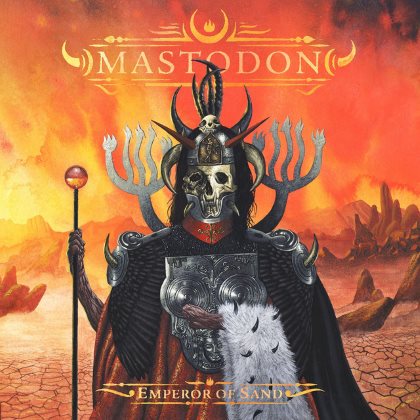 Oh, the dilemmas of high-profile tech wizards who, 30 years ago, would've faced less scrutiny than they do in the face of a sophisticated and far more opinionated metal community. Then again, people cried foul at IRON MAIDEN for utilizing synthesizers and writing a rock-friendly tune on "Somewhere in Time". That was an album viewed by some as another notch in the heavy metal legend’s belt, and, by others, as a troubling point of no return. Such is the same wall MASTODON inadvertently pivoted itself nose first against the minute they rhymed "curl" with "burl" inside a watered-down pop rocker. For many fans, that equated to "hurl”. They did more than that with the alarming single "Save Yourself", from the band's seventh album, "Emperor of Sand".

Call it the price of doing business with the upper echelon. Or, perhaps, there's something unspoken amidst Georgia metal bands, who have collectively written the most spellbinding American metal in modern times, that speaks to dropping the simplistic now and then. When you play such fast, complicated measures album after album, night after night, then the devil's advocate must speak in defense of dropping a crude (crude by MASTODON's advanced, dizzying procedures) straight rocker. If, for no other reason, then to calm the presumed wracking of the brains that must be ever manifest in this group. In this case, however, the devil gets no due, but perhaps wins the day overall through the rest of "Emperor of Sand"'s scorching sludge prog.

As on "WICK" from local contemporaries ROYAL THUNDER, MASTODON utilizes grief as a creative harbinger for "Emperor of Sand". This is the unit’s first concept album since 2009’s "Crack the Skye", partially conceived by the loss of guitarist Bill Kelliher's mother, and similarly taps the services of that album's producer, Brendan O'Brien. It's also 10 out of 11 songs of transcendent enormity.

"Emperor of Sand" thematically begs for comic or film treatment with its expressionistic visuals, undead Sultans, howling sand sirens and perpetual torment within a sunbaked hellhole. One might envision a Hyperborean spin on "The Hills Have Eyes" while spinning this album, assuming you're able to quickly process the zipping riffs, whirligig progressions and Brann Dailor's ludicrous speed kit crashing. The actual concept behind "Emperor of Sand" deals with a condemned man in the desert trying to telepathically communicate with African and Native American tribes to send him salvation with a sun-drowning miasma. Someone call Neil Gaiman's agent.

Yet the underlying, real people messages on this album are abundantly clear as Brent Hinds, Troy Sanders, Brann Dailor and Bill Kelliher pulverize their instruments, slinging their aural strews, Jackson Pollack-style. On "Precious Stones", the advisory message is to avoid letting time get away from you while the moments and people are still there to be treasured, the presumed jewel being Catherine Kelliher. "Roots Remain" attempts to soothe those stricken by loss while "Word to the Wise" is obvious in warning against worldly blinders veering people toward their own self-destruction.

The cataclysmic pounding on "Sultan's Curse", "Roots Remain", "Word to the Wise", "Ancient Kingdom", "Clandestiny", "Andromeda" and "Scorpion Breath" hearkens back to the "Leviathan" days, which should appease longtime fans who have been holding on by the molars of their sea-blasted teeth for this. "Blood Mountain" and more than a few nods to "Crack the Skye" figure into the scheme, but the entire stew is dumped both with finesse and earth-rumbling clamor. Everything MASTODON has sought from itself to elevate its craft beyond the constrictions of metal is realized here. It's found on "Precious Stones"’s melodic grunge, the uplifting huff rock bump through "Steambreather"’s fuzz-drenched trudges and "Roots Remain"’s GOBLIN-esque death chimes. The synthesizer weirdness on the engulfing "Clandestiny" may tweak some listeners, but if you're a fan of Italian giallo horror, what MASTODON does will no doubt summon giddy echoes of "Suspiria".

In this fashion, "Emperor of Sand" is an absolute triumph, as is the band’s emotive mini-epic finale, "Jaguar God". Any band making sense of blackout balladry, GENTLE GIANT-flavored prog, tidal crashing doom and end-of-days rumbling thrash in one sitting is a marvel; for MASTODON it’s another day at the office, until the group drops an unexpected (and frankly, unwanted) water-cooler joke in the form of "Show Yourself".

Let's not dwell too much upon what has already been said about "Show Yourself", but it is a glaring leper sore on an album that otherwise goes for broke and satiates immeasurably. Any other band without MASTODON's pedigree, would kill to have a professional pop pumper like "Show Yourself". For MASTODON, it's pedestrian, a bowing concession to their label. BARONESS may have gotten away with the straight rock play on "Yellow & Green" and "Purple", but even that band paid a price.

While "Show Yourself" is a befuddling interference to a grand spectacle, the opposite sentiment would be to thank Reprise for releasing an anti-big label album of this complex nature. The label has banked "Emperor of Sand" upon the prospect of one single, when a mandatory three would've been expected in the eighties. Here's the rub, though: "Emperor of Sand" hasn't been selling steady units because of "Show Yourself". It sells because the rest of the album is old MASTODON, pureMASTODON, and the fans are showing up for it. "Emperor of Sand" is thus a flawed masterpiece (one being nit-picked to the point of overkill by the press),begging the question as to who got one over upon whom here.