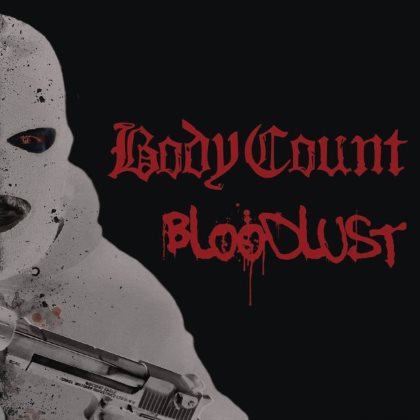 It's no secret, the nation's been divided and as ICE-T yelps, you know the reason why. A conservative cotillion resumes command of the White House following a controversial election still under investigation. In response, the streets are raging and BODY COUNT has something to say, of course. Guitarist Ernie C, especially, views this presidential turmoil as a nationwide wake-up call. Thus, political corruption, racism, gangbanging, wars between drug dealers, all the piss and vinegar topics that originally gave BODY COUNT its f-bombed platform: it's all on again.

If this is the first time you're sitting with a BODY COUNT album, you're in for an experience. What began as a project between rapper-turned-actor ICE-T and veteran guitarist Ernie C has culminated into one of the most contentious acts the genre's ever seen. Gangsta rap met metal in 1992 after punk went crossover and much of American hard rock was swept aside dismissively. SUICIDAL TENDENCIES, the ANTHRAX/PUBLIC ENEMY tag of the latter's "Bring the Noise" and even the BEASTIE BOYS's "Check Your Head" album opened the door for BODY COUNT. The group served the metal scene an abrupt shot to the dome. Some listeners laughed like lunatics to "KKK Bitch" while others continued to cower in fear of anyone within a one-block radius wearing a Malcolm X ball cap.

The vehement rap-rocker "Cop Killer" caused BODY COUNT more grief than they needed in '92. One might say ICE-T has since paid a penance with his detective roles in "New Jack City" and "Law and Order: Special Victims Unit". Still, when he's on the mike, he's back to the streets and if the shit gets real, be sure it'll get ugly. BODY COUNT brings something out of ICE-T even more primal than his classic rap albums: "Rhyme Pays", "Home Invasion" and the pivotal "Freedom of Speech...Just Watch What You Say". His six-string sidearm, the self-taught Ernie C has taken up the torch vacated by Rocky George as one of the most prolific guitarists of street metal, if we're to label what BODY COUNT does as street metal.

While a good bit of BODY COUNT has beheld smarm beneath the dissent, this band has lived what it has played, and has suffered nearly as many close-to-home deaths as a Newark street corner. Original members Beatmaster V, D-Roc The Executioner and Mooseman (the latter a victim of a drive-by slaying) all passed before BODY COUNT's fourth album, "Murder 4 Hire".

It's already been eleven years since then as the band's sixth joint, "Bloodlust", and picks up from where BODY COUNT first got started and has never wavered. The same stakes ring perpetually topical, as indicated by "Civil War", "The Ski Mask Way" and "No Lives Matter". The sound: brutally inflicted doom and hardcore measures with thrash bursts tolled by pissed-off mofos from top-to-bottom. Joining BODY COUNT for this ghetto-blasted hell ride is Dave Mustaine, Randy Blythe and Max Cavalera with cameos on "Civil War", "Walk With Me" and "All Love is Lost" respectively.

The band is perhaps the tightest it has ever been. "Civil War" sets an ominous trudge, later whisked by a sharp thrash sequence. Edicts of martial law are declared and indictments against the right wing are slung with the guttural, accusatory mantra "civil war" moaning behind ICE-T". The tone is thus staked for the rest of the album.

As he did in his nineties rap, ICE-T depicts thug life on "The Ski Mask Way", "This Is Why We Ride", "God, Please Believe Me" and "Black Hoodie". Audiences today are hopefully more sophisticated than those who first confronted "Freedom of Speech", "O.G. Original Gangster" and "Home Invasion" to hear these tracks not as celebration, but a eulogy for an exploited and slain demographic. ICE-T reiterates a syndrome that hasn't gone away despite the gory caveats staked within the long-ago gangsta youth films "Menace II Society", "Boyz n the Hood" and "New Jersey Drive". ICE-T and BODY COUNT have been throwing the bloody statistics in people's faces for more than 20 years and the rap sadly remains the same.

On the more extreme side, the skulking hardcore tirade "All Love is Lost" could be one of the most combustible songs anyone in BODY COUNT has been affiliated with. There's no bones spared, much less proverbially broken in a one-strike-only lyrical rant with riffs projected even nastier than ICE-T and Max Cavalera's raging.

After ICE-T drops a spiel detailing the formation of BODY COUNT, the band explodes through what has become the most talked-about moments of the album: a pounding cover of SLAYER's "Raining Blood". As the original's famous breakdown formulates one of BODY COUNT's key grooves, this one's a near-perfect facsimile.

The recurring messages of "Bloodlust", like all of BODY COUNT's albums prior to, are purposefully discomfiting, but it's the musicianship that counts most here. "Walk With Me" is expertly shoved and thrashed and even yanked into grind territory. The band is in terrific form, and Ernie C is as major a player as his MC. To hell with the lemonade, Geico: ICE-T is where it's at in this case.