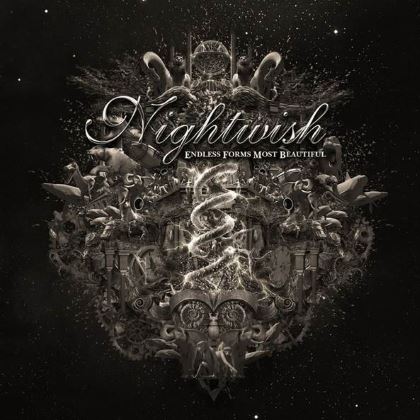 As we've officially entered the Floor Jansen era of NIGHTWISH, the hangover from the Anette Olzon controversy has been, for all intents and purposes, chased away. Olzon's moved on with her solo album from last year, "Shine", while NIGHTWISH themselves look to outdo their widely embraced "Imaginaerum" from 2011. This includes the addition of not only Jansen, but Kai Hahto on drums, who replaces Jukka Nevalainen, on sabbatical. It also has a 23-minute number, "The Greatest Show on Earth", which condenses "Endless Forms Most Beautiful"'s lengthy Darwinist exhibition as the most ambitious work NIGHTWISH has yet attempted.

Opening with a brief spoken passage by evolutionary biologist and author Richard Dawkins, "Shudder Before the Beautiful" chugs forth, not so much with might but with a steady pulse and thick riffs to give Floor Jansen a rocking portal to gently work her way in. She doesn't assert herself more than she needs to, letting the instrumentation layer up and ultimately blossom with choral and string supplements. As NIGHTWISH's intent with "Shudder Before the Beautiful" is to point out the grandeur of the world around us, the song is beautifully structured and accented by Emppu Vuorinen's gorgeous guitar solo and Tuomas Holopainen's responsive key scales.

As the guitars get a little more attention on this album aside from the encompassing orchestral elements, "Weak Fantasy" is as meaty as it is lavish. Floor Jansen spikes herself in spots to accent the increasing riffs on the choruses, but shrewdly maneuvers the verses with delicate tones. By instinct, Jansen has already learned her way around this band, and instead of flaunting the role of symphonic metal diva, she gives a richly filled song like "Weak Fantasy" (one bedecked by flamenco swipes and war drum percussion) a tasteful frontal nudge instead of a full-on rip, regardless of Floor's capacity to do the latter.

Piano and Troy Donockley's uilleann pipes greet the bass-driven single "Elan", a tried 'n' true softie rocker (LEAVES' EYES, for instance, have made their bread and butter on songs like this). The sweeping harps and strings give the song added grace, which Floor Jansen handles with a confident, if restrained lilt. The more theatrical "Yours is an Empty Hope" follows afterwards like a xylophone and violin-aided pounce into a film action sequence. The guitars grind and Floor Jansen responds to the song's swell by showing off her tougher palettes in the shadow of choral gushes and battering backing vocals from bassist Marco Hietala. Jansen does the same later in the album on the sweatier moments of "Alpenglow". Wisely, neither she nor the band cheats "Yours is an Empty Hope" by getting over-aggressive. A terrific, stepped-back progression allows NIGHTWISH to create mystique before letting Jansen holler her way through a clamorous climax and a banging finale.

Jansen's biggest moment to shine comes with the esthetic ballad "Our Decades in the Sun" and like her predecessors, she's seductive as sin within this gentle milieu. She will also have NIGHTWISH fans eating out of her hands chanting the hook-driven "My Walden"'s mantra of "higher, higher, higher" on the choruses. "My Walden" trickily turns a dime on itself by shifting from its peppy course toward an ambitious folk march draped with tin whistles and fiddles.

The heavy guitars and sturdy pulse propelling the title track are so valuable in maintaining interest on an album this long, but NIGHTWISH keeps the throttle going on "Endless Forms Most Beautiful". A grand chorus doesn't hurt. As the symphonic layers pour upon the track from every corner, it seems, the base rock groove of the song is never lost. Then Tuomas Holpainen's calliope keys on the ridiculously catchy "Edema Ruh" are as beautiful as Floor Jansen's swoon.

The six-minute "The Eyes of Sharbat Gula" is a somber trek guided by Troy Donockley's moving pipes, Tuomas Holpainen's melancholic piano melody and a velvety chant shared between Floor Jansen and Marco Hietala. Joined by a dazzling children's choir, the composition flows meditatively into the closing gala of "The Greatest Show on Earth".

Is "The Greatest Show on Earth" NIGHTWISH's finest moment as a band? Let the listener stand judge for all 23 minutes, but what should be said is that this curiously omposed epic reaches for both heartstrings and the id and yanks on both as hard as it can. The opening five minutes alone feature some of the band's most emotive arrangements ever before another narrative from Richard Dawkins reminds us to absorb the majesty of our planet, all before the heavy business takes over. A modification — or at least a barely disguised tip of the hat — to MEGADETH's "Symphony of Destruction" ushers the track through a succession of double hammer and orchestral/choral wonderment. NIGHTWISH throws everything they have in their arsenal, including tribal rhythms and sampled animal exhalations into "The Greatest Show on Earth". To their credit, they plant extensive rock sections to keep a track of this magnitude rolling, since there's a message on behalf of Mother Earth from Dawkins to follow. NIGHTWISH makes the effort to throw as many music theories, external resonances (including a New Age aquatic foray) and a soaring cast chorus of "We were here", to push for a shared global experience.

NIGHTWISH fans shouldn't drown themselves in sentiment by comparing Floor Jansen to Anette Olzon or Tarja Turunen, for that matter. It's pointless, since the band itself sounds energized and wildly inspired on "Endless Forms Most Beautiful", as if "The Greatest Show on Earth" isn't indication enough. A few regurgitated themes being this album's only fault, the transition to Floor Jansen is seamless and NIGHTWISH can look upon their new creation with as much pride as "Imaginaerum", "Dark Passion Play" and even "Once".