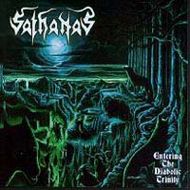 Long-running underground U.S. black metal act SATHANAS drop their fifth album courtesy of Singapore's Pulverised Records (pay attention to this label). Blackened thrash is more like it, with an emphasis on the thrash part. The secret to "Entering the Diabolic Trinity" is in its non-nonsense, in-your-face approach. Black metal in feel only (largely because of vocalist/guitarist Paul Tucker's vocal style),the trio crafts songs that make the point with a weighty riff, driving (often mid-tempo) rhythm, and ominous aura. The choruses are basic and memorable without coming off amateurish or dated. Rather then trying to impress with virtuosity or depress with tortured atmosphere, SATHANAS goes straight for the jugular.

The vintage thrash guitar tone (think something along the lines of classic period ANTHRAX) and no-frills approach hits home on highlights such as "Unleash the Wolves", "Descent of the Holy", and "Realm of Carnage". Injecting deep, yet intelligible, death growls in all the right places succeeds in making the main melody lines even more memorable, not to mention downright fun in a fist-pumping, leather-and-spikes kind of way. The thunderous kick drum delivery is quite massive, but it helps a great deal if you are listening to the album on a sound system of decent quality because Jim Strauss's kit bashing will make mince meat out of cheap speakers.

The songwriting on "Entering the Diabolic Trinity" is not complex, and thank goodness for that. There is an honest and refreshing quality in the old school approach that is missing from many of today's metal albums. While the arrangements do not vary a great deal from one track to the next, there is more than enough variety, thanks to the occasional tempo break and guitar solo, to keep the album from becoming redundant. Besides, why beat around the bush when you can clobber the listener over the head with a sledgehammer? "Entering the Diabolic Trinity" is about busting out a amplifier-blowing riff, breaking kick-drum heads, and riding an evil groove straight down to Hell.