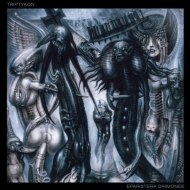 Sickened, haughty, lurching, three weeks long and drenched in pretentious, glowering atmosphere, TRIPTYKON picks up right where CELTIC FROST's brilliant "Monotheist" left off. It's at once highbrow and lo-fi, art and brutality, and it places Tom Gabriel Fischer's "new" band immediately in the vanguard of the death and black metal genres he helped birth, while sidestepping nearly all of their restrictions.

From the outset, the time-stretching doom drone of "Goetia"'s intro sets an imperious, dread-soaked tone for the proceedings to come. The main riff before the verse is simplicity itself, but its uneasy tempo and minor-chord scrape make it a thing of dark, minimalist beauty. Not that TRIPTYKON don't dish out punishment as well, in jagged, primitive slashes, Fischer sounding barbaric and vicious as he barks over the crushing riffs of the verse and chorus. And none of that resembles the creepy monotone madrigal robot chant at the end of the song, around the ten-minute mark. In short, one TRIPTYKON song is a lesser band's concept album, a treasure trove of dynamics and plot twists buried under a sodden, oppressive blanket of dank, foggy atmosphere and morbidity.

If anything, you'd almost expect more"Into the Pandemonium" style oddities and flights of fancy from TRIPTYKON. Though "Myopic Empire" takes an abrupt left turn into a spooky piano-and-whisper interlude, and "My Pain" could fit on a PORTISHEAD album, there is a prevailing mood on "Eparistera Daimones", and that mood is bleak, feral, diseased, and queasy. While the songs churn and buckle like tectonic plates even in their most droning and ambient skeletal basics, one gets the sense that any experimentation for its own sake was scraped off these tracks early on, dismissed as counterproductive to that dark vibe. These songs are raw like scraped flesh, auditory wounds that throb with feeling and glower with an ugly, spiteful energy.

Fischer is one of the few people in the music world able to back up his truckloads of self-important pronouncements and defiant attitude with worthy, capital-A Art. TRIPTYKON's charred post-everything metal may find kindred spirits under a hundred different rocks, from NACHMYSTIUM to SATYRICON to 1349, but in renewing their own grim muse they've tapped directly into the spirit that made prime CELTIC FROST so important to all those bands' founders in the first place. A masterpiece of sleepless, timeless, crawling primal doom, not so much better than their peers as above them, in a place they'll likely never tread.