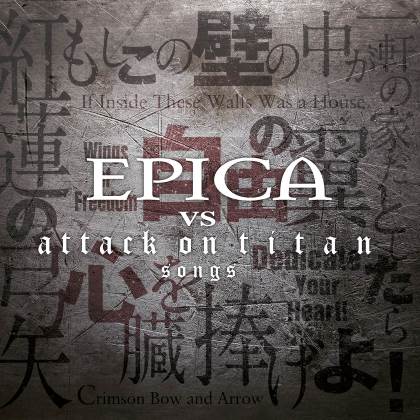 Epica vs. Attack on Titan

If you're a manga and anime fan, "Attack on Titan" (along with ""One Piece" and "Assassination Classroom") is one of today's global phenoms of the genre, much as "Akira", "Bubblegum Crisis", "Battle Angel Alita" and "Ghost in the Shell" were in the past. If you want to see culture clash at its best, come to Baltimore to witness cosplay attendees of the Otakon convention vying for street space during the NFL preseason amongst pre-liquored Ravens fans. It's a guaranteed spectacle.

Late last year, symphonic metal pundits EPICA released its covers EP of music from "Attack on Titan", composed by LINKED HORIZON's Revo, leader of Japanese ensemble SOUND HORIZON. SOUND HORIZON blends classical, metal, J-pop and other elements, and the music created for "Attack on Titan" was originally sung in Japanese and narrated in German. EPICA stripped down Revo's core melodies and gave them an extensive symphonic metal upgrade, donning "the EPICA jacket," as guitarist Isaac Delahaye would put it.

"Epica vs. Attack on Titan" was first released only in Japan, but now Nuclear Blast is offering the EP worldwide distribution. For EPICA fans, knowledge of manga is hardly prerequisite, since the differences between a Jaw Titan and a Cart Titan can be inundating.

Here, EPICA utilizes English singing and narratives along with the band’s gratuitously stuffed symphonic and choral arrangements. It's thus no surprise that the group fluidly translates "Crimson Bow and Arrow" to cinematic heights, even if Mark Jansen's customized growling and Coen Janssen's (also responsible for the scoring and choir sections) tornado-speed synths smother at times.

The patriotic march coursing through "Wings of Freedom" provides the platform for a frequently fast power metal number with swarming layers to peel apart and relish. Not so much sensory overload as it is hyper-processing here, and on "Dedicate Your Heart", upon which Simone Simons drops a tour de force performance, the barraging of EPICA's pageantry is frequently exhilarating. Only the breath-catching ballad "If Inside These Walls Was a House" eases the EP's insistent momentum.

If only EPICA could've recruited taiko drumming legends KODO (on "Crimson Bow and Arrow" in particular),this would've been an even greater adaptation. Nonetheless, what the group has done here is a remarkable conversion in itself.