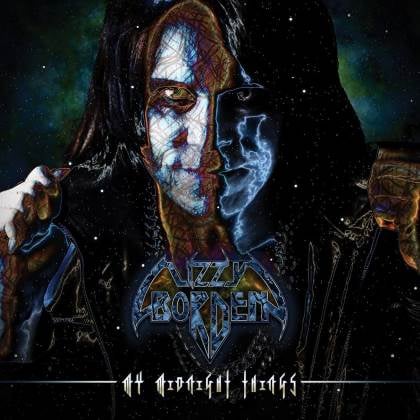 If you've followed LIZZY BORDEN since the "Give 'Em the Axe" EP, you've learned to come prepared for the unexpected. As one of the L.A. metal scene's most ferocious acts, nobody was prepared for the lighter direction taken on 1987's "Visual Lies". The ""Master of Disguise" album two years later proved to be a wild gambit that returned cred to Lizzy, if not a wider audience embracing his need to grow as a performance artist.

It's been 11 years since the bricks-heavy "Appointment With Death" album, which leaves to question where Lizzy Borden's musical mind frame is at in 2018. Well, make sure you're sitting down when dialing into "My Midnight Things", a bold and shifty glitter rock album with roots dug from seventies rock and moody goth-pop from which HIM staked its massive career upon. For longtime LIZZY BORDEN fans, an open mind will be prerequisite, but the positive news is this album is more endearing instead of off-putting.

What's remarkable from the outset of this album is how sharp Lizzy sounds, and how operatic the title track rings. With a touch of QUEEN, a dash of Meat Loaf and a glossed-up revitalization of classic L.A. metal, "My Midnight Things" rolls like a champion. Its hazy synth spritzes carry into the catchier-than-hell "Obsessed with You", "The Perfect Poison" and "Run Away with Me".

If it's not apparent after two songs that this album is hardly a standard LIZZY BORDEN disc, "Long May They Haunt Us" throws another unexpected curve, effortlessly mating THE BEACH BOYS and goth with a charming sugary swing. "The Scar Across My Heart" finds Lizzy and the band taking on pop punk, but it's happily more akin to REDD KROSS than FALL OUT BOY.

How much shrewder does the band have to be than with "The Perfect Poison"? The song soars on Marten Andersson's lobbing bass, and a groove so delicious you'd nearly say yes to a cyanide chaser. Lizzy Borden himself stands tall with each building bar, whipping King Diamond-worthy shrieks at will. This song is major league stuff with each tick.

"Our Love Is God" being the heaviest monster of the album, its proto crunch ushers Lizzy Borden's whirligig notes through its new-gen mash. And with the pop elevations of "We Belong to the Shadows" mingling a heave of SURVIVOR-based sweat rock with nervy hits of contemporary pop, it all surprisingly well suits him.

With HIM snuffing out its own goth-pop torch, it's hardly likely the band’s audience (a demographic possibly unfamiliar with "Menace to Society" and "Love You to Pieces") will flock to LIZZY BORDEN. That doesn't mean Lizzy and the band didn't take some damn good notes on staying relevant. After 11 years, "My Midnight Things" rings like a Hail Mary album, but it's so stinking smart and exciting, it connects receptions more often than not.

At this point in his career having sung "American Metal" and "Me Against the World" to a presumed point of inherent boredom, it's stellar that Lizzy Borden challenges himself like this with zero to lose and a bucket load of cred to gain. This still being Lizzy Borden, though, check that bucket for a gallon or two of stage blood.