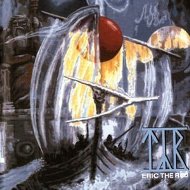 To paraphrase the great Doug Stanhope, being the biggest band on the Faroe Islands is kinda like being the prettiest waitress at a Denny's diner. With a population of less than 50,000 and an area about the size of a large city, this group of tiny isles in the Norwegian Sea is home to numerous descendents of Viking settlers from centuries ago. Something tells me that, should they hold a Faroese Battle of the Bands, not too many people would show up to contest TYR's claim to the throne.

Luckily for the rest of the world, these guys are actually pretty cool. They ply the pagan/folk metal trade, with a very traditional feel to the arrangements and especially the vocals. No death growls here – the singing is clear, bold and sonorous, with plenty of chanted refrains in English, Danish, and Faroese (derived from old Norse)! It's hard not to get chills during passages like the haunting chorus of "Regin Smidur" — those voices raised in unison could be echoing across a thousand years of their homeland's history.

Not everything is grim pomp and circumstance here, though — in fact, some may find the band's note-perfect rendition of silly Irish drinking shanty "The Wild Rover" to be a bit ludicrous and fey. But hell, it grows on you — who doesn't like drinking songs? The band returns to its heavy bombast with "Stýrisvølurin" — the non-English songs definitely standing out as the most spectral and atmospheric, either due to their exotic (to me, anyway) nature, or the fact that the band is more adept at dealing with their native tongue in vocal arrangements.

The guitarwork here is of note — the leads are stellar, and the riffing is top-notch, adding a refined prog-metal touch without compromising the ancient feeling and folky vibe of the overall album. Just check out the majestic opening to "Rainbow Warrior" — some improbable fusion of grandiose 70's prog, power metal and Viking incantation into some polished, futuristic hybrid still redolent with the musty odors of forgotten texts in dank castles. Sure, it'll all be a bit too hale, hearty and chain-mailed for some, but it's that very over-the-top earnestness that makes TYR so damn refreshing in this overly ironic age.

This is an expanded reissue of a 2003 album, which was a big success for TYR at home but was poorly distributed elsewhere. Hopefully this reissue will give the band a foothold in the international scene, because TYR have quite a lot to offer the rest of the world. File next to CRUACHAN and SKYCLAD, left of ENSIFERUM, carrying on the spirit of BATHORY's "Hammerheart" era. Quorthon, and a whole lotta real Viking ancestors to boot, would be proud.