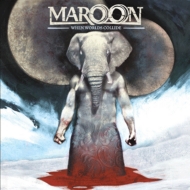 In theory, each album should stand on its own without any external factors being weighed in. But there's something intangible that just grabs you when you're hearing the real thing. There's no “conviction" knob on a studio mixing board, but when it oozes from every pore of a record, you feel it, and you know it.

Straight-edge vegan hardcore Germans MAROON laid the blueprint for metalcore in the late '90s, becoming a buzzed-over band on the European continent without making much noise Stateside. Their last album, "Endorsed by Hate", came out over here last year without much fanfare, but "When Worlds Collide" seems to be more of a priority. The question is, can a record that's pretty much textbook metalcore still make a dent in a pretty jaded scene?

The thing is, the "metalcore" tag is becoming more of an albatross than a selling point. Even when a band is really, really good at what they do, and they're way more metal than core, it's hard to win people over (how many of you ran out and bought that last STAMPIN' GROUND disc, for instance?). MAROON bring it all back to what made this hybrid of styles appealing the first time around — crushing metal riffs, intense and wild-eyed breakdowns, impassioned lyrics spat in a venomous roar, arrangements stripped down to the bare framework, and enough bruising thrash to bloody an entire basement full of wife-beater-clad tough guys.

We make it all the way to "Annular Eclipse" before we're exposed to much in the way of melodic vocals, and even those are intense, delivered with gusto and a Dickinson-ian heft. For the most part, though, the melody on "When Worlds Collide" comes from tasty dual guitar licks, while the vocals tear at the eardrums like heavy-grit sandpaper, delivering caustic truths and remaining unswerving in their beliefs, even at the cost of some potential fans.

At the end of the day, it seems unfair to call MAROON "just" a metalcore band, because they're one of the archetypal groups in this style, and it's not their fault that a thousand pretenders to the throne have been mucking up the gene pool these last few years. Their power and conviction make "When Worlds Collide" an impressive, cathartic and visceral listen. It remains to be seen, though, whether enough people still care enough to check it out.