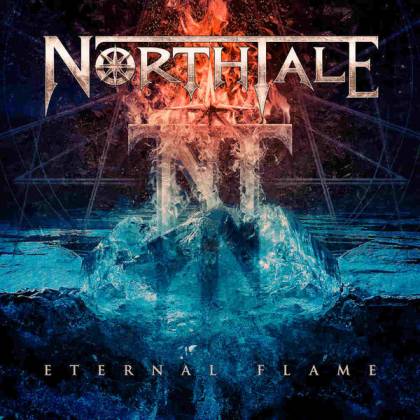 Although it made barely a ripple in the global scene, NORTHTALE's debut album "Welcome to Paradise" was arguably a connoisseur's choice back in 2018. Guitarist and chief creative force Bill Hudson (CIRCLE II CIRCLE/ex-JON OLIVA'S PAIN) had a very clear and noble vision — to set out on that first record, with (now former) vocalist Christian Eriksson providing the necessary multi-octave flair, to create a bunch of great tunes that were unapologetic in their debt to HELLOWEEN and STRATOVARIUS. Three years on, the formula remains largely the same, but with a new frontman, Guilherme Hirose, and a noticeably heavier sound, "Eternal Flame" demands attention and respect in a way that its predecessor arguably didn't.

It always helps when an album kicks off with a certified anthem, and "Only Human" delivers the goods here, Hudson's ruthless seven-string assault underpinning the sweetest of blustery melodies, before an enormous chorus erupts in textbook power metal splendor. But "Eternal Flame" is not solely concerned with upgrading the genre's basics: from "Wings Of Salvation"'s sprawling pomp onwards, NORTHTALE's second album is an object lesson in ebb, flow and wringing fresh conceits from the most well-worn of materials.

"Future Calls", replete with a cameo from HELLOWEEN's Kai Hansen, gently expands those classic tropes, while "The Land of Mystic Rites" proudly goes Full Prog, with multiple changes of pace, some outrageous QUEEN-like guitar histrionics and an irresistible detour into esoteric tribal rhythms and sun-scorched psych mantras. Meanwhile, "Midnight Bells" is a gloriously overwrought, fists-in-the-air moment, like WOLF jamming with QUEENSRYCHE on some hellish highway to Valhalla, while the title track marries neo-classical, technical dexterity to a bowel-rattling speed metal undercarriage, as Hirose glides effortlessly through the gears, sublime harmonies erupting from every angle.

The real joy here is in how Hudson has ticked every conceivable box for fans of this stuff while never reining in his ambition as a songwriter. That sense of creative urgency is most apparent on "Nature's Revenge": an 11-minute epic with a dark and dramatic heart, but melodies that are so resolutely uplifting that they would make a dead man grin. With a startlingly brutal mid-section and a magnificently ominous, Moog-embellished, quasi-doom final descent toward a tooth-dislodging, hell-for-leather pay-off, it's a remarkable piece of music that suggests that NORTHTALE remains a project with few limitations.

As an added masterstroke, NORTHTALE have plundered the IRON MAIDEN deep-cut department and conjured a gleaming new version of "Judas Be My Guide": an unsung gem from the British legends' "Fear Of The Dark" album, that definitely deserves a spirited rebirth. Pleasingly, it fits into the "Eternal Flame"'s deceptively adventurous sprawl perfectly and adds further weight to the notion that Hudson's band are the connoisseur's choice and potential power-hungry heavyweights.