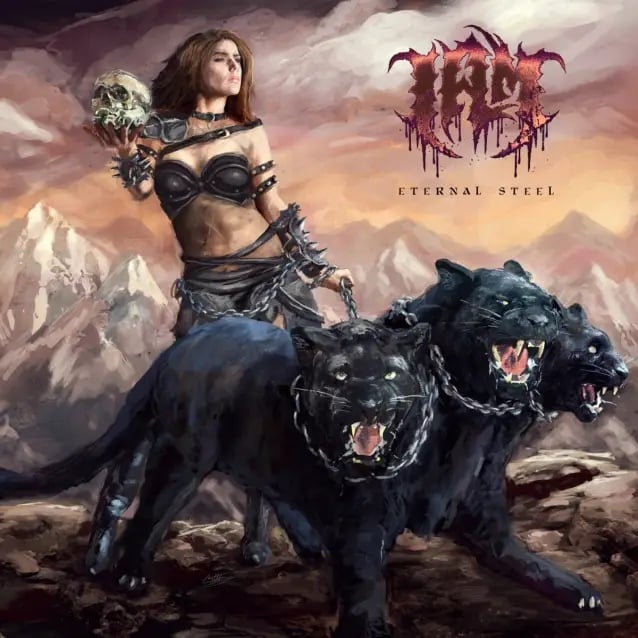 Their name speaks of a certain bullish self-confidence, and so it seems only fitting that I AM's big label debut has an unmistakable swagger about it. Symptomatic of a subtle sea-change in the metal world, wherein many new bands are veering away from the overt commerciality of metalcore, "Eternal Steel" is a big, gnarly and unrepentant metal album. I AM's sound makes no attempts to reinvent the wheel. This is a bellicose and groovy hybrid of gritty death metal, savage thrash and deathcore dynamics, with just enough of a seething, southern twang to warrant a PANTERA comparison or two. Spiritually akin to the likes of POWER TRIP and ENFORCED, if not entirely musically compatible, I AM simply do a lot of the primal, pugilistic things that the greatest metal bands do, and with the flesh-flaying panache of true diehards. Get the basics right, and people will bang their heads. It's not complicated.

The best songs here are viscerally thrilling. "The Iron Gate" is a four-minute call to arms that packs a serious punch at snail's pace, before flooring the accelerator and whipping up a giant, spectral circle pit. "Vicious Instinct" is a sharp and nasty thrash gem, with unapologetic shades of SEPULTURA and a particularly unnerving vocal from frontman Andrew Hileman. The doom-laden "Infernal Panther" is a rare and welcome change of pace, and the heaviest thing here by far; while "Eye Candy" awakens a few post-punk ghosts on its way down through a macabre, schizophrenic and sludgy path.

Pleasingly, I AM have plenty of imagination, too. The creepy intro to "Queen Incarnate"; closer "Manic Cure"'s disquieting dynamics; the warped, chromatic death of "Surrender to the Blade": each one a self-contained act of metallic subversion. Even the title track, which takes off in traditional death / thrash fashion, refuses to do exactly as expected, preferring to let the grooves mutate at their own natural pace.

If "Eternal Steel" lacks anything, it's that one undeniable anthem that will propel I AM to the bigger audiences that their smart and destructive music deserves. On this evidence, they have the talent and the intensity to make it happen, and this record has more than a few moments that will make sensible people want to destroy their furniture. And that's what matters, let's face it.