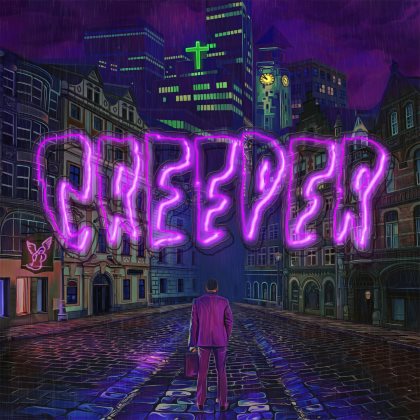 Eternity, in Your Arms

With HIM announcing its forthcoming end, someone needs to pick up the willowy rock torch for love-stricken youth. Goth and punk rock being natural bedpartners, they've seldom co-habited with real impact post-SISTERS OF MERCY, THE SMITHS and THE MISSION UK. HIM's charm was the ease with which it pushed its unthinkable love-metal vibe, which could've run hokey instead of halfway adorable much of the time. The band’s song "The Sacrament" was one of the most spectacular rock odes to infatuation of the past two decades, and the group will be sorely missed. Fortunately for its fans and today’s teen generation, there's the timely arrival of CREEPER.

There must be a twisted pride coming out Southampton, England behind this brash quintet that could've been arrested for some of its attention-getting stunts. False reports of its social media being hacked directed news toward what ended up being a fake kidnapping event—the CREEPER pack sure has a pesky sense of humor. That comes with turf staked by moody, if bright post-adolescents bearing affinities for flamboyant punk, SoCal hardcore, goth, old-time rock 'n’ roll and MEAT LOAF's arena rock theatricality. CREEPER hardly shoots for HIM's cajoling seduction methods. Instead, its pissy grievances about foiled relationships are sheer blood sport and sure to catch on with a jaded youth fielding extra frustrating dynamics within their Snapchat-addled lives.

After three years and as many EPs, CREEPER has built its sick love shtick to near perfection, culminating in the unit’s often-thrilling debut album, "Eternity, in Your Arms". The gangly Will Gould totes his stage presence like a dapper goth hybrid of Joey Ramone and Andrew Eldritch, even if his vocal tones resemble neither. Gould, who began his path in music at an early age promoting regional shows, knows how to dog a stage and a rock video. His supporting cast of Ian Miles, Hannah Greenwood, Oliver Burdett, Sean Scott and Dan Bratton help CREEPER pull off a valiant debut sure to be one of 2017’s most talked-about releases.

"Black Rain" assertively makes the statement that punk rock and goth have once more found themselves harmoniously aligned. This is a contemporary and fantastical comeuppance for music that was pure fringe culture at one time. Is it in any fashion comparable to THE CURE's "The Head on the Door" or SIOUXSIE AND THE BANSHEES' "Tinderbox"? Absolutely not, but CREEPER doesn't strive to be those albums. Instead, this band seeks to carry those alt-goth classics’ sardonic spirit with its own stylish textures, grounded more in a head-on mash between modern pop punk and vintage rock.

The blitzing "Poison Pens" and "Room 309" are glossy hardcore jams with gang chants sent galloping at cheerful velocity. In the case of "Poison Pens", this spirited loft comes despite an inherently snide and spiteful angst toward a soiled romance with the dumped victim's overture, "Our love is dead, hang your head”. "Suzanne" keeps the velocity throbbing, but it becomes more than a mere punk grinder. There's a real keenness to this song’s assembly, be it the wheedling calls from the group as lead-in to the choruses, or the clever overhead sneering behind the song's up-tempo grooves.

"Hiding With Boys" is a brisk rock and roller taking a sarcastic peek into the bedroom of the contemporary young female. Through CREEPER’s eyes, the view is not much different than of adolescent girls from past generations. The kick here is that the narrator has designs on his borderline trashy muse, having less to do with sex and more to do with a pining for someone altogether obtuse to him. "Loving you is killing me”, Will Gould aches here, and inside of his pain-stricken reminiscence during the sullen if soulful "Misery". The metaphors dropped into "Misery" are colorful and affective; not quite as smarmy and vindictive as, say, Robert Smith, but kept within the latter's overcast demeanor.

The American rock stylings of "Darling" and "Down Below" are chocked full of pep, but within two tracks of hearing "Eternity, in Your Arms", anyone can guess that CREEPER’s intent is hardly peppy. A shift in mood on "Down Below" is guaranteed, but the tradeoff for the downer slide is a heaving, vocal-layered second half that could belong inside an off-Broadway production. "Darling" takes cue from the success VOLBEAT has found by reinterpreting epochal rock and roll chords, using less force and more finesse.

Hannah Greenwood takes lead vocals on "Crickets"’s folk-grounded anguish. She's as ferocious as Gould, gnashing at a purported jilting flame, "My love you can't pull out with pliers”, and "She's in your jeans, but I don't care...you were my dream, now my nightmare”.

CREEPER's songwriting is terrific, even if the arrangements are repetitive at times. CREEPER’s enormously vivacious, and takes "Winona Forever" to heights beyond its speedy and grumbly verses. Heights that ring of romantic aspiration despite its pervading nihilism. It would be a sick joke if it wasn't stacked with proficient chord structures and dense vocal deposits almost unheard of from anyone else in punk music.

Don't be surprised if CREEPER becomes popular, at least popular by today's definition in a sales-starved music climate. We live in pessimistic times and our entertainment mirrors our darker, and more jaded tendencies. The term "feel good" is reserved for those still shouting back at Dora the Explorer on TV. Thus, music that calls as much as calls out has an inevitable place in many bittersweet hearts, much less a CW drama series—bank on that.